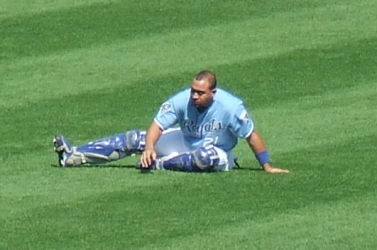 Miguel Olivo hit 9th for the Dominican Republic in the 2009 World Baseball Classic but wound up being their best producer, with 3 runs and 5 RBI in 3 games. He was 3 for 11 with two home runs in outhitting players such as David Ortiz, Miguel Tejada, Jose Reyes and Hanley Ramirez. Olivo made a crucial error in the first inning of a 3-2 loss to the Dutch national team, throwing away the ball on a bunt by Sharlon Schoop in what would be a 3-run inning. He scored their second run, singling off Sidney Ponson and coming home on a fly by Ramirez. In the lone Dominican win, over Panama, Olivo hit a 2-run homer off Ramiro Mendoza and a 3-run shot off Yeliar Castro.

He set the Kansas City Royals' all-time team record for home runs by a catcher with 23 in 2009, despite starting the season platooning with John Buck. In 2006, playing for the Florida Marlins, he became the first player in baseball history to strike out over 100 times while drawing fewer then 10 walks. Moreover, 4 of his 9 walks were intentional. After his record-setting season with the Royals, he moved to the Colorado Rockies as a free agent in 2010, hitting .269 with 17 doubles, 14 homers and 58 RBI in 112 games; his batting average was the highest of his career, as were the 27 walks he drew that season (against 117 strikeouts). He moved to the Seattle Mariners in 2011, where he played 130 games - the most of his career - hitting .224 with 19 doubles and as many homers and driving in 62 runs. In 2012, he played 87 games for the M's, hitting .222, with 14 doubles and 12 homers. His K/W ratio was as awful as ever, as he drew 7 walks while striking out 85 times.

Olivo signed with the Cincinnati Reds early in 2013 but was released at the end of spring training. The Miami Marlins then signed him, having lost projected starter Jeff Mathis to an injury earlier in March. However, young Rob Brantly quickly got most of the work behind the plate, and Olivo fell down the depth chart, falling to the third-string catcher when Mathis returned from his injury in mid-May. Frustrated by the situation, Olivo left the team without permission before the game of June 14th and was placed on the restricted list the next day. On July 5th, he was formally handed his release, having hit .203 in 33 games for Miami. he did not play again that season, but signed with the Los Angeles Dodgers for 2014, strictly as an insurance policy, given the Dodgers already had A.J. Ellis, Drew Butera and Tim Federowicz on their roster. He began the season in AAA with the Albuquerque Isotopes, but was called up to L.A. from May 1-11th when Ellis was on the disabled list. He hit .217 in 8 games in the bigs, then went back to Albuquerque. He was hitting an excellent .370 in 19 games when he got into a fight with teammate Alex Guerrero on May 20th, the two exchanged words during a conference on the mound in a 7-4 loss to the Salt Lake Bees, then continued the fight in the dugout. Olivo apparently bit off part of the ear of his younger teammate, forcing Guerrero to undergo plastic surgery and miss an estimated five weeks of action. While the Dodgers were unwilling to comment on the situation immediately, the journeyman catcher was clearly risking his career in taking on the team's best hitting prospect. Indeed, the Dodgers summarily released him the next day.