Home of the Los Angeles Dodgers, 1962 to present

(also known as Chavez Ravine when hosting the Angels)

LONGEST HOME RUN: 506 ft. completely out of the stadium (one of only four ever to do so) by Willie Stargell 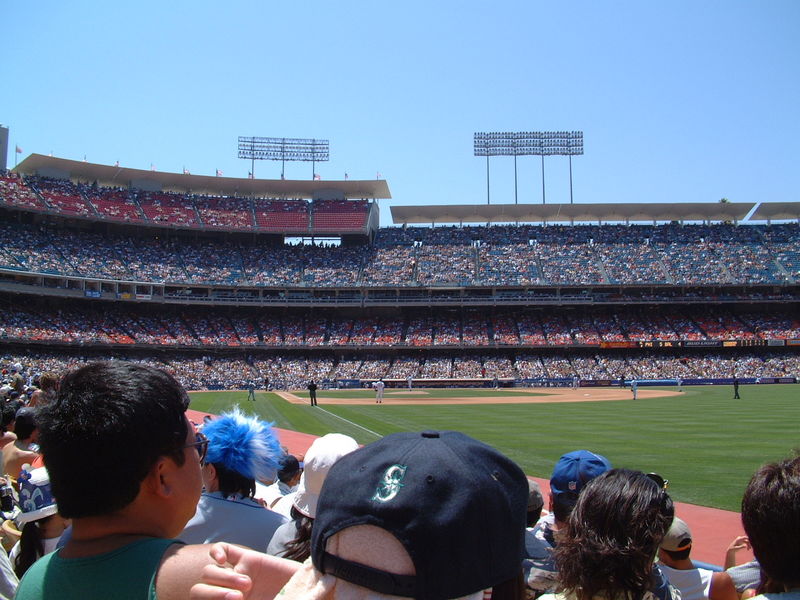 Dodger Stadium is the current home of the Los Angeles Dodgers. It is regularly among the leaders in attendance in Major League Baseball, often around 3 million. It is the site of one of the most famous home runs in major league history, Kirk Gibson's home run off Dennis Eckersley that ended Game 1 of the 1988 World Series. That feat that was celebrated on its 30th anniversary, in 2018, by adding a seat in the right-field pavilion decorated in blue and featuring Gibson's signature.

The ballpark is also known as Chavez Ravine, because of the former neighborhood on which it sits. When it first opened in 1962, it was the shared home of the Dodgers and the American League's Los Angeles Angels; the Angels called the ballpark Chavez Ravine during the four seasons they made it their home, until the end of the 1965 season, after which they moved to Anaheim Stadium. 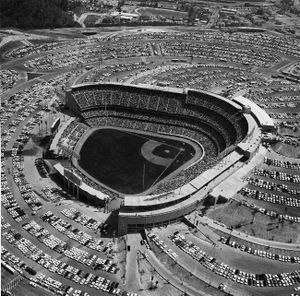 Stadium as seen from the air.

Chavez Ravine was a shantytown neighborhood inhabited by Mexican Americans when the city of Los Angeles identified the site for development. Using eminent domain powers, the city expropriated the inhabitants in order to use the land for "public purposes". In fact, most of the land was turned over to Dodgers owner Walter O'Malley to build a ballpark, while O'Malley gave the city Wrigley Field in return, which was demolished and whose land could be put to use by the city.

The ballpark's address was 100 Elysian Park Avenue, until in April 2016, the Los Angeles City Council decided to rename the street "Vin Scully Avenue" in honor of the team's legendary broadcaster, Vin Scully, who was entering his 67th and final season behind the microphone. The new address is 1000 Vin Scully Ave.

Reaching the ballpark by private vehicle is the only feasible option for the vast majority of spectators, resulting in huge traffic jams and in many fans routinely missing the first pitch as a result. In 2018, inventor Elon Musk proposed to build a network of public transportation tunnels of 3.6 miles that would allow the transportation of passengers in small specially designed vehicles from West Hollywood to the ballpark, bypassing the worst of the traffic. The Dodgers immediately indicated their interest in proceeding with such a project. Under the ownership of Mark Walter, the Dodgers have been looking into other ways to change the ballpark experience (and not coincidentally increase profits). These include opening a night club and sports bars within the ballpark complex, giving fans access to up-to-the minute analytical data through their smart phones, or allow fans to switch seats every few innings to give them different viewpoints on the action.