Angel Stadium of Anaheim or The Big A, as it has been known since its inception, received its nickname from the scoreboard in left field. The superstructure of the scoreboard rested outside the stadium, thanks to the 1979-1980 renovation that enclosed the park for use by the Los Angeles Rams, until the most recent renovation in 1996 – when it was moved completely out of the stadium and out to the parking lot as a message board.

Angel Stadium is sometimes derided for its closeness to Disneyland, but some might consider that to be a plus. Beach balls tend to frequent the bleachers and stands here. The park has hosted the 1967 and 1989 All-Star Games. The ballpark suffered some damage during the January 1994 earthquake (the photos of the outfield signs lying crumpled over the upper grandstand and the "Big A" slumped over were telling), but was up and running by April. The stadium lost its secondary tenant, the NFL's Rams, to St. Louis in 1995, which was a blessing as co-habitation was never optimal.

Disney bought the Angels and renamed them the Anaheim Angels in 1997. The park underwent reconstruction for all of 1997. As the garish football seats were demolished in the outfield (in favor of – a rockpile?), the Angels choked in the AL West pennant chase. Late in the season, Disney sold the "naming rights" to Edison Electric, leaving ESPN Sportscenter wags to suggest a nickname change to "The Big E", which devolved into "The Ed" for the 2002 season.

The Los Angeles Angels of Anaheim committed to play here through the year 2018, which was later extended. There were some noises made about contraction being a possibility, but the success of the 2002 team (and the settlement of the labor situation) squelched that. 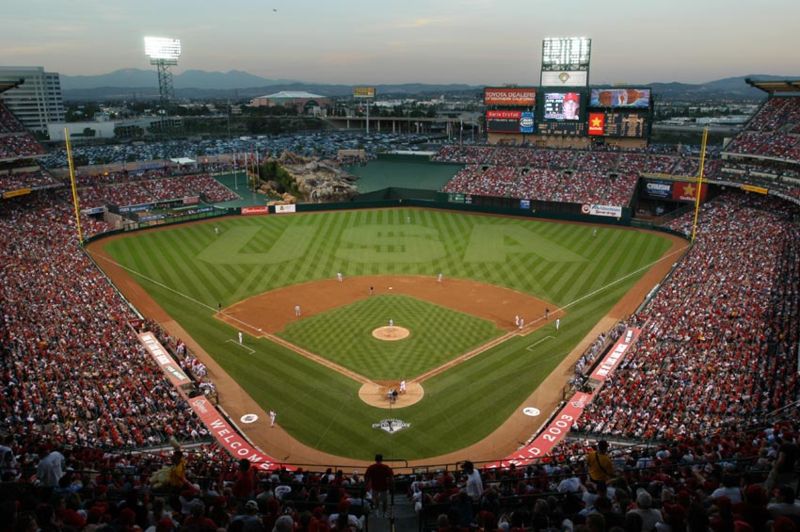 In what was a footnote in the 2002 labor settlement, the crowd at the last Angels game before the MLBPA strike deadline was downright hostile; fans threw things onto the field – and they definitely weren't beach balls. The fans came back, though, for the playoffs. In a sea of red, they took the "Rally Monkey" to the first ever World Series Championship in franchise history. In the second World Series game played here, Barry Bonds of the San Francisco Giants hit a homer to right field that nearly hit the "Big A" in the parking lot; however, it was Garret Anderson's three-run double in Game 7 that clinched the 4-1 win for the Halos.

In 2004, Disney sold the team to Mexican-American businessman Arte Moreno, whose first priority was to lower the price of beer in the stadium. His second priority was to sign Montreal Expos all-star Vladimir Guerrero to play for Mike Scioscia's Angels in 2004 (where he won the AL MVP Award). His third priority was to take the naming rights off the park, and simply call the place Angel Stadium – a takeoff, of sorts, on Dodger Stadium. That move was followed by the team taking the name Anaheim off their road uniforms as well, and was followed in January of 2005 by the team renaming themselves Los Angeles Angels of Anaheim. A legal battle ensued between the city of Anaheim and the team, as they felt that the team was flaunting its obligation to have "Anaheim" as part of its name. Complicating things was the city's attempt to put a new NFL stadium on nearby land. The city eventually withdrew its lawsuit, which was generating a lot of negative publicity and in 2016, after the expiration of the ten-year mandatory period, quietly dropped the "of Anaheim" portion from the team name.

In December 2019, the team paid the city $350 million to buy the stadium and the surrounding parking lots, and indicated that they had agreed to continue using Angel Stadium as their home ballpark until at least 2050. This deal led to the resignation of Anaheim Mayor Harry Sidhu two years later, on May 23, 2022, when it was revealed that he had attempted to use the deal to receive kickbacks in the form of campaign contributions from the Angels' ownership. He denied any wrongdoing, but was also charged with obstructing a grand jury investigation into money laundering from the head of the local chamber of commerce, who cooperated with the FBI. Additional accusations of bribery, fraud, obstruction of justice and witness tampering were also leveld by the FBI, leading the city council to call for his resignation.