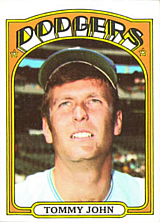 "When they operated I told them to put in a Koufax fastball - they did, but it was Mrs. Koufax's." - Tommy John, about his famous surgery

Although pitcher Tommy John won 288 major league games and may well end up in the Hall of Fame some day, he is perhaps most famous because he missed the 1975 season due to the ligament replacement surgery that now bears his name, Tommy John surgery. That surgery, which he pioneered, has saved the career of countless pitchers after him.

In Hall of Fame voting in 2009, he received 31.7% of the vote, with 75% needed. This was his final year on the writers' ballot. John was considered by the Veterans Committee for the first time as part of the 2020 Hall of Fame Election, when he was one of ten candidates from the "Modern Baseball" period (1970-1987). He did not make it that time, but in the longer run, his chances for induction are decent since the Hall has eventually let in every 20th Century pitcher with 250+ wins (except for a few who retired fairly recently and may still get in).

It's hard to believe that John's career lasted 26 years. He broke in as a 20-year-old rookie on the 1963 Cleveland Indians, when 43-year-old Early Wynn was still pitching. Sudden Sam McDowell was also a 20-year-old pitcher on the team. It was the year that Pete Rose was a rookie. Many years later, in 1989, 46-year-old Tommy John was still pitching, in the year when Ken Griffey Jr. and Juan Gonzalez were both rookies. The Yankees manager for the last part of 1989, Bucky Dent, was nine years younger than John.

John spent the beginning of his career in the American League, where he was a solid if unspectacular pitcher. In 1972, he was traded to the Los Angeles Dodgers in return for Dick Allen; both players would flourish for their new teams. John went 11-5 and 16-7 in his first two seasons on the West Coast, 1972 and 1973. He had to adapt to the more running style of the National League: he had a slow delivery when he arrived in Los Angeles, but Maury Wills worked with him to improve it, so that he would not be constantly victimized by base stealers. He also studied the quick delivery used by fellow left-hander Jim Kaat, and modeled himself after him with great results. From that point on, he would be one of the toughest pitchers to run on in the majors. In 1974, he began the season on a great note, going 13-3 with a 2.69 ERA in 22 starts. He then tore a ligament in his left elbow; his career seemingly over, John became the first athlete to get ulnar collateral ligament reconstructive surgery. This is the elbow ligament that can be damaged by repeated throwing, and the surgery replaces it with a ligament taken from another part of the body - in John's case, his right forearm. The surgical procedure today is commonly called Tommy John surgery. Revolutionary at the time, the operation today is almost routine.

He was 31 years old when injured and sat out the entire 1975 season. John came back to earn 164 of his 288 wins after the surgery and pitch to the age of 46. He won 20 games three times after the surgery - his career high before had been 16 - including back-to-back 20-win seasons after signing with the New York Yankees as a free agent in 1979. He was at the center of a controversial managerial decision in Game 6 of the 1981 World Series. He had been the Yankees' best pitcher in the Series, winning Game 2 with 8 shutout innings, coming on in relief in a one-run game in Game 4, then giving up only one run in the first four innings of Game 4. His ERA at that point stood at 0.69, but he was due to bat in the bottom of the 4th with the score tied at 1 and the bases loaded with two outs. Yankees manager Bob Lemon decided to send in pinch-hitter Bobby Murcer, who lifted a fly ball to the outfield for the last out. The Yankee bullpen blew the game wide open, giving up 7 runs over the next two innings, and the Los Angeles Dodgers were World Champions.

A ground ball pitcher, John perhaps threw more double play pitches than anyone in the history of the game. In a July 27, 1988 game, he made three errors during the course of one play. This might have been the only time that happened in a big league game. With the Milwaukee Brewers' Jim Gantner on first base and one out, Jeffrey Leonard grounded to John. He bobbled the ball, then threw it into right field. The relay from the outfield came to him, and he again bobbled the ball then threw it past the catcher. Both Leonard and Gantner scored during the play. The Yankees still won, 16-3.

Six of the ten most similar pitchers to John (according to the similarity scores method), are in the Hall of Fame, and three of the others may eventually get in. The most similar is Jim Kaat, who won 283 games. John twice finished second in the Cy Young Award voting, and was second once in the league in ERA. He was twice second in the league in wins, and led the league in winning percentage in his injury-shortened 1974 season. He appeared in three World Series, with an ERA of 2.67, but was on the losing end each time. He was inducted into the Indiana Baseball Hall of Fame in 1996.

After his playing career ended, John was a Minnesota Twins broadcaster for several years, then became a minor league pitching coach for the Harrisburg Senators, in the Montreal Expos organization, in 2002 and the Edmonton Trappers in 2003. John managed the Staten Island Yankees in 2004. In 2007, he returned to managing with the Bridgeport Bluefish of the independent Atlantic League.

In January 2021, multiple news outlets reported that John had Covid 19 and had been hospitalized more than once.