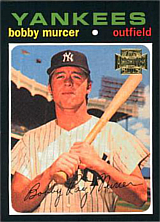 Bobby Murcer, who had a 17-year major league career, lost a lengthy fight against cancer on July 12, 2008. A five-time major league All Star and Gold Glove winner in 1972, he was in the top ten in MVP voting three years in a row.

Murcer represented the first step back to credibility for the post-Mickey Mantle New York Yankees. Having grown up in Oklahoma and been signed by Tom Greenwade, the same scout who signed Mantle, Murcer was touted as the "next Mickey Mantle" which was unfair. Murcer was a complete player and put together some solid seasons for the Yankees of the late 1960s and early 1970s. No one could even come close to replacing The Mick, and Bobby took all the pressure that came with that status with the class he had throughout his career.

As the Yankees began rebuilding, they added players like Thurman Munson, Lou Piniella and Graig Nettles to Murcer and Roy White to lay the groundwork for the next championship run of the 1970s. Prior to 1975, the Yankees flipped Murcer to the San Francisco Giants for Bobby Bonds who had been touted as the next Willie Mays. Murcer posted some good seasons with the Giants and then the Chicago Cubs, but he was not happy to have been traded from New York. In turn, many Yankee fans hated to see Murcer go, as he had become extremely popular in New York. After the 1975 season, although Bonds had put up good numbers for the Yankees, he was traded to the California Angels for Ed Figueroa and Mickey Rivers who both were key ingredients for the Yankee championship caliber teams of 1976, 1977 and 1978.

In 1979, Murcer was reacquired by the Yankees to play outfield and DH. It was a welcome homecoming for the Yankees and Yankee fans' Murcer still was immensely popular in New York. The homecoming became bittersweet, as Bobby's close friend and team captain Thurman Munson was killed in a plane crash on August 2nd. Murcer and Lou Piniella gave the eulogy for Munson, and on the night of Munson's burial, Bobby homered and drove in the winning run to give the Yankees a victory over the Baltimore Orioles. He always considered that one of the shining moments of his career.

Murcer finally got to play in the World Series in 1981, and the chance to get in on some Yankee postseason play. When he finally retired, in the middle of the 1983 season, he went to the broadcast booth. He was one of the most beloved Yankees of all-time, and remained a total class act throughout it all. Yankee fans always recognized Murcer as one of the last links between the Mantle era and the Munson/Reggie Jackson era. He always carried himself well and led the team through the very lean years when the Yankees went from being a dynasty to league doormats.

Murcer missed the 1967 and 1968 seasons due to military service.

After his career ended, Murcer was a Yankees broadcaster until the date of his passing on July 12, 2008, except for 1989 when he was an assistant general manager for the club. He also served as chairman of the Baseball Assistance Team.