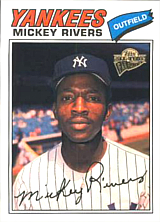 Outfielder Mickey Rivers had a solid 15-year career in the major leagues but was best known as a colorful character who uttered many humorous remarks. His entire career was spent with three American League teams, and although he was with the New York Yankees for less than the other two teams, many of the funny remarks date from that period of his career.

After attending Miami Dade College (where Bucky Dent was a teammate), Rivers was drafted by the Atlanta Braves in 1969 and made his pro debut that year with the Magic Valley Cowboys, hitting .307. At the end of the summer, he was traded along with Clint Compton to the California Angels for Hoyt Wilhelm and Bob Priddy. He split the next four years between the minors and the Angels, hitting well over .300 at every minor league stop.

Rivers stuck in the majors for good in 1974 as the Angels' center fielder. In his first full big league season, he hit .285 with 30 stolen bases and led the AL with 11 triples despite playing in just 118 games. The next summer, 1975, he hit .284 while leading the circuit with 13 triples and 70 steals (the most in the AL since Ty Cobb stole 96 in 1915). Following that season, he was dealt to the Yankees along with Ed Figueroa for Bobby Bonds.

In his first year in New York, in 1976 Rivers hit .312 with 43 stolen bases and 67 RBI and finished third in MVP voting. He was the leadoff hitter for the AL in the All-Star Game that summer but could not be located as the National Anthem was being played. The team searched and found Rivers sleeping in a space between the dugout and clubhouse. He hit .348 in the 1976 ALCS but struggled in that fall's World Series, hitting only .167 as the Yanks fell to the Cincinnati Reds.

Rivers missed 24 games due to injuries in 1977, but he hit .326 with career bests in 12 homers and 69 RBI. He drove in the winning run in the deciding Game 5 of the ALCS against the Kansas City Royals but again struggled in the World Series, hitting just .222 as New York captured the championship over the Los Angeles Dodgers. His average dropped to .265 in 1978, but he performed well in the postseason, hitting .455 in the ALCS and .333 in the World Series as New York repeated as champs, once again defeating the Dodgers.

In 1989, Rivers played for the West Palm Beach Tropics of the Senior Professional Baseball Association. In 54 games, he hit .366 with 33 RBIs and stole 9 bases.

Mick was portrayed by Leonard Robinson in ESPN's 2007 miniseries The Bronx Is Burning. His son, Mickey Rivers Jr., spent time in the Rangers organization.

"Me and George and Billy are two of a kind." - Mickey Rivers

Sources include The Fall of the Roman Umpire by Ron Luciano