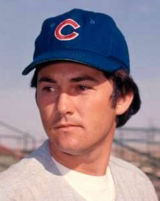 Clint Compton pitched one time in the bigs, on October 3, 1972 against the Philadelphia Phillies. Coming on for the Chicago Cubs in the top of the 6th inning, he retired the side in his first inning of work. In his second inning, he allowed singles to Larry Bowa and Mike Schmidt, walked Greg Luzinski, then walked Joe Lis with the bases loaded to force in a run. Roger Freed batted into a double play, scoring Luzinski, then Clint retired Bill Robinson on a fly to third base to end the inning. And with that, he was done, owner of a 9.00 ERA in two innings. His son, Clint Compton, Jr., also played professionally.