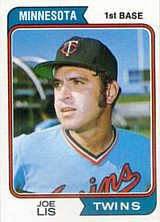 Joe Lis was the consummate Triple A star who could never win a regular major league job. In the minors he slugged 236 home runs while in the majors he had a 105 OPS+ in numerous cups of coffee.

Signed by the Philadelphia Phillies in 1964, Lis showed power as he rose through the minor league ranks, hitting 33 homers for the Bakersfield Bears in 1967, 32 for the Tidewater Tides in 1968, and 36 for the Eugene Emeralds, leading the 1970 Pacific Coast League. He reached the majors with Philadelphia in a September 1970 call-up and hit his first big league home run off future Hall of Famer Steve Carlton of the St. Louis Cardinals on September 8th.

Lis was on the Phillies Opening Day roster in 1971 and started the season platooning in left field with Johnny Briggs. However, he hit just .211 in 59 games for the last place club and could not break into a lineup that included such sluggers as Greg Luzinski and Willie Montanez. He started the next summer, 1972, back with Eugene, where he hit 26 home runs in only 65 games, a .775 slugging mark. Future major league stars Mike Schmidt, Andre Thornton and Oscar Gamble were all on the same team, and all slugged between .525 and .550, much below Lis. Recalled again by Philadelphia, he hit .243 with 6 homers in 62 games that year.

Traded to the Minnesota Twins in a deal that brought Cesar Tovar to Philadelphia before the 1973 season, Lis started the season at first base apparently due to an injury to Harmon Killebrew. When Killebrew went down again later in the season, Lis took over as the regular first baseman, hitting .245 with 9 homers in 103 games (his only season with more than 100 ML games played). Early in the 1974 campaign, he was dealt to the Cleveland Indians where he played sparingly, appearing in 86 big league games over three years. Yet he starred in the minors with the Toledo Mud Hens in 1976, hitting 30 home runs, leading the International League in runs (93) and RBI (103), and taking home MVP honors.

Following his big minor league season, Lis was selected by the Seattle Mariners in the 1976 expansion draft. He played just 9 games for the club in 1977, including his only big league appearance as a catcher. His minor league career continued through 1979.

After his playing days, Lis coached American Legion Baseball and operated the Joe Lis Baseball School in Evansville, Indiana. His son, Joe Lis Jr., who had reached Triple A as a player, succeeded him in the role of American Legion coach.