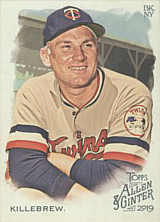 "If Harmon Killebrew isn't this league's #1 player, I've never seen one. He's one of the greatest of all time." - Reggie Jackson, 1969

"Killebrew can knock the ball out of any park, including Yellowstone." - Paul Richards, 1959

Harmon Killebrew was baseball's most prolific slugger of the 1960s, clubbing 393 home runs during the decade. When he retired after a 22-year career, his 573 round-trippers trailed only Hank Aaron, Babe Ruth, Willie Mays and Frank Robinson on the all-time list. "Killer" placed in the top five in AL MVP voting six times and was elected to the Hall of Fame in his fourth year of eligibility in 1984, despite being regarded by some as a one-dimensional player.

Born and raised in Idaho, Killebrew played baseball, football, and basketball at Payette High School. He planned to attend the University of Oregon, where he was offered a scholarship, until Washington Senators scout Ossie Bluege signed him to a $30,000 contract in 1954. He made his big league debut on June 23rd of that year, and as a bonus baby was required to remain on the Senators' roster for two full seasons. He played sparingly during that time, seeing action at second and third base and hitting 8 homers. Midway through the 1956 campaign, he was sent down to the minors. The next year, with the Chattanooga Lookouts, he hit 27 homers and drove in 101 runs, leading the Southern Association in both categories. 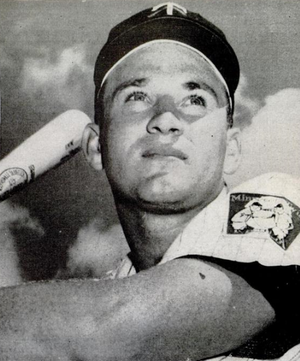 Killebrew spent most of 1958 in the minors, but after Eddie Yost was traded away after the season, he became Washington's regular third baseman in 1959. He immediately made a splash, hitting 42 home runs to tie Rocky Colavito for the American League lead. He split 1960 between third and first, logging slightly more at first base, raising his batting average by 34 points but slumping some in homers and RBI. The Senators became the Minnesota Twins in 1961 and Killebrew ended up playing twice as much first as third. Along the way he smashed 46 homers, tying Jim Gentile but far behind the rampaging Roger Maris' 61 and Mickey Mantle's 54 in the expansion fueled year. In 1962, he moved full time to left - the first of three straight years in the outfield - yet still paced the AL with 48 homers and 142 RBI. The 48 dingers set the major league record for most home runs by a batter who failed to hit .250 (.243). On September 21, 1963, he hit four homers in a doubleheader against the Boston Red Sox and again led the AL in homers while setting the major league record for most home runs (45) by a batter who had fewer than 100 RBI (96). In 1964, he paced the circuit with 49 homers, his third straight summer leading the AL, while stroking only 11 doubles - the fewest doubles of any major leaguer hitting over 40 home runs in one season. He dropped to 25 homers in 1965, but the Twins won the American League pennant that year. He hit a home run in Game 4 of the World Series, but Minnesota fell to the Los Angeles Dodgers in seven games.

Killebrew tied Triple Crown winner Carl Yastrzemski for the American League lead in home runs in 1967 with a robust 44, but struggled with injuries in 1968, hitting just .210 with 17 round trippers. He bounced back in grand fashion the next summer, 1969, leading the league with 49 homers and 140 RBI to win the 1969 American League Most Valuable Player Award. His whopping 145 walks topped the AL, the highest total of the four times he led the junior circuit. The Twins made the postseason that year and the next as American League West champions, falling to the Baltimore Orioles in the ALCS both seasons. He led the AL in runs batted in for a third and final time in 1971. His numbers declined in the next three years, and he was released by the Twins after the 1974 season.

Killebrew signed with the Kansas City Royals for $125,000 prior to the 1975 season. Primarily seeing action as the team's designated hitter, he managed only 14 home runs while hitting just .199 and was released at the end of the year. At the time of his retirement, he was fifth on the all-time home run list.

As of 2019, Killebrew stood 12th on the all-time home run list. Along with Lou Gehrig, he hit 49 home runs in a season twice but was never able to hit 50 in a single season. His eight total 40+ seasons are second only to Babe Ruth. The seat that he hit with the longest home run at Metropolitan Stadium is suspended from the roof of the Mall of America, on the former site of Met Stadium in Bloomington, Minnesota.

Following his playing days, Killebrew was a television broadcaster for the Twins from 1976 to 1978 and again from 1984 to 1988, and with the California Angels in the early to mid-90s.

Killebrew was elected to the Baseball Hall of Fame on January 10, 1984 by the Baseball Writers Association of America. Playing through the heart of the second dead-ball era depressed his career batting average to .256, but his exceptional home run production, prolific RBI out of so few base hits, and copious walks helped him into the Hall. A high lifetime Adjusted OPS of 143 puts him in good company there. His #3 is also retired by the Twins, and he is a member of the Twins Hall of Fame and Washington Nationals Ring of Honor.

Killebrew was diagnosed with esophageal cancer in late December 2010, and underwent treatments at the nearby Mayo Clinic in Phoenix, AZ where he lived. On May 13, 2011, he issued a short statement stating that his fight against the disease was coming to an end and that there was no hope for recovery. He died four days later, at the age of 74.

His son, Cam Killebrew, played in the minor leagues for three seasons. His grandson, Grant Hockin, was a second-round selection in the 2014 amateur draft.

"The Killer was one of the most feared sluggers in baseball history, but he was also one of the nicest people ever to play the game. He was one of the few players who would go out of his way to compliment umpires on a good job, even if their calls went against him. I'd call a tough strike on him and he would turn around and say approvingly, "Good call." And he was the same way in the field. And he never did this to get help on close plays, as some players do. The man hit 573 major league home runs and no umpire ever swung a bat for him." - Ron Luciano, The Umpire Strikes Back 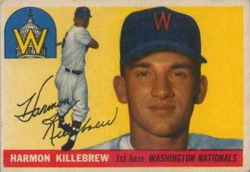