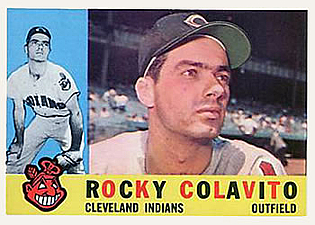 "He was everything a ballplayer should be: dark, handsome eyes, and a raw-boned build-and he hit home runs at a remarkable rate." - Terry Pluto, The Curse of Rocky Colavito

"You can't tell how much spirit a team has until it starts losing." - Rocky Colavito

One of the most powerful and popular players of his time, Rocky Colavito was a devastating slugger possessed of one of the best outfield arms in all of MLB. A wildly popular star in Cleveland, he was involved in two terribly unpopular deals with the Tribe, coming back in one that cost the club prime years of Tommy John and Tommie Agee.

Colavito arrived in the big leagues with the Cleveland Indians in 1955. The Tribe placed second in 1955 and 1956, both productive years for the budding star-to-be. His best year with Cleveland was 1958, when he hit a career-high .303 and led the AL with a .620 slugging percentage, belting 41 home runs and driving in 113 runs. He finished 3rd in the MVP voting, his best finish ever. The next year, 1959, he finished 4th in the MVP vote behind a league-leading 42 home runs, 66 extra base hits and 301 total bases, becoming the first Indian to ever sock 40 homers in back-to-back seasons. On June 10th, he followed in the footsteps of one Lou Gehrig, becoming the second man in American League history to belt four consecutive home runs in a nine-inning game.

With The Rock firing on all cylinders as the Indians finished just five games behind the pennant-winning Chicago White Sox, it was time for one of the biggest and stupidest trades in baseball history. Two days before Opening Day in 1960, the 25-year-old reigning American League home run champion was dealt to the Detroit Tigers for the reigning batting champion, 29-year-old Harvey Kuenn. The deal was the brain child of Indians GM Frank Lane, nicknamed "Trader", who had an almost unhealthy fixation and obsession with making trades, to the point that, as St. Louis Cardinals GM, he once tried to deal franchise icon Stan Musial to the Philadelphia Phillies before August Busch's intervention killed the deal. Indians fans were outraged, lighting up the team's switchboard with disgust at the news before organizing a "Don't Knock The Rock" campaign. Lane promptly doubled down on his move, causing further outrage, by claiming with a straight face: "What's all the fuss about? All I did was trade hamburger for steak." The steak, Kuenn, was injured almost immediately after being acquired and, because Lane just never could help himself, was dealt after the season to the San Francisco Giants for Willie Kirkland and Johnny Antonelli, Lane bolting shortly thereafter to the Kansas City Athletics.

Whither Colavito? Paired with Tiger greats Al Kaline and Norm Cash, he immediately helped lead Detroit to a 100-win season in 1960. Tall, lanky and bull-strong, he intimidated pitchers by stretching his bat across his back and menacingly pointing it at the the mound. Though a big swinger who placed in the AL Top 10 in home runs nine years out of ten in his prime, he never struck out 100 times in any season. After a "subpar" 1960 - still strong enough to place 4th in the AL with 35 homers and 10th with 87 RBI - he rebounded with a searing 1961, swatting 45 bombs, driving in a whopping 140 runs, scoring 129 times and slugging .580. He followed this with another strong year in 1962, batting .273 with 37 home runs, 112 RBI and earning his third All-Star nod in four years. He dipped to a .271 average with 22 home runs and 91 RBI and moved to the Kansas City A's in 1964 with a bounce-back season in which he hit .274 with 34 home runs and 102 RBI, returning to the All-Star Game. On September 11th, he became one of the youngest men to reach the 300 home run plateau, simultaneously reaching 900 RBI.

His time in Kansas City was short-lived. Cleveland fans rejoiced in January 1965 when Colavito returned as part of a giant three-team trade between the Athletics, Chicago White Sox, and Indians. They had reason to celebrate, as Rocky parked 26 homers and paced the AL with 108 RBI and walks, once again being named an All-Star and placing 5th in the MVP race. On September 6th, he reached 1,000 RBI. Though he managed to hit 30 homers in 1966 - good for 6th in the AL and a final All-Star nod - Colavito's production had begun to slip. Meanwhile, some of the players the Indians had dealt to re-obtain him were blossoming. Tommie Agee won the AL Rookie of the Year with the White Sox in 1966, belting 22 home runs. Tommy John won 14 games for the Pale Hose in both 1965 and 1966, and led the AL in shutouts and with a 2.62 ERA that second season. When The Rock failed to deliver at the plate in 1967, the Indians shipped him in mid-season to the White Sox, where he staggered to the finish line with only 8 home runs in 123 games. He finished his career in 1968, split between the Los Angeles Dodgers and New York Yankees as a part-time player, batting only .211 in 79 games. With more left in his arm than his bat, he took to the mound late in 1968 for the Yankees, earning a win in 2 2/3 innings of relief against the Tigers. It proved a happy bookend to his only other pitching appearance, 3 innings of relief for Cleveland a decade earlier, and cemented a perfect 0.00 career ERA. He was the last position player to earn a win on the mound until Brent Mayne did it for the Colorado Rockies in 2000.

Handsome, muscular, and a fan favorite, Colavito was one of the great power hitters of his day. His 374 home runs - many tallied during baseball's second dead ball era in the 1960s - place him just ahead of Gil Hodges and Ralph Kiner and just behind Norm Cash and Carlton Fisk. Although primarily noted for his offensive prowess, Colavito was also feared for his rocket arm in the outfield. He was good with the glove as well, compiling a perfect 1.000 fielding percentage in 1965 with the Indians. Still, his shorter career and dramatic decline left him perhaps a bit short of the Hall of Fame. While his 153 points on Bill James' "Gray Ink" test best the 144 produced by the average Hall of Famer, he does not show as strongly on other tests such as the Hall of Fame Monitor. Players with comparable similarity scores include Frank Howard, Roy Sievers, Boog Powell and Cash - all contemporaries who also fall short of Cooperstown.

After his playing career, Colavito was a television broadcaster for the Indians for several seasons. He was also an Indians coach in 1973 and from 1976 to 1978 and a Kansas City Royals coach in 1982 and 1983. He settled in the vicinity of Reading, PA, where he had previously played in the minors, and was a mushroom farmer for many years. [1] In 2006, Colavito took his rightful place among other Cleveland Indians greats in the team's Hall of Fame, newly revived.