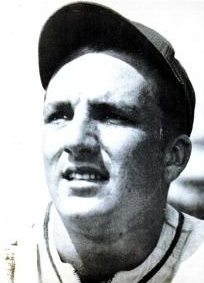 Inducted into Hall of Fame in 1975

"Ralph Kiner can wipe out your lead with one swing." - Warren Spahn, quoted at Kiner's Hall of Fame site

Ralph Kiner, a member of the Hall of Fame, was the National League home run champion in each of his first seven seasons in the major leagues. He missed close to three full seasons to service in World War II, thus reducing his career statistics.

A month and a half into the 1943 season, he was called to the military to serve in the Navy Air Corps, piloting a plane and looking for Japanese submarines.

He made his major league debut on April 16, 1946 with the Pittsburgh Pirates, and his 23 home runs that season led the National League. In 1947 he gained notice for hitting 51 homers and compiling a .313 batting average. Many of Kiner's homers were hit into a short left- and left-center-field porch at Forbes Field, built for Hank Greenberg but utilized more by Kiner, which originally was known as "Greenberg Gardens" but became known as "Kiner's Korner". Greenberg was also with the Pirates in 1947, and Kiner said Greenberg was his biggest influence. Kiner set a major league record (which he still holds by himself) of 8 home runs in 4 consecutive games in September of that year. In August, he had hit 7 home runs in another four-game stretch.

In 1949 Kiner topped his 1947 total with 54 home runs, falling just two short of Hack Wilson's NL record. It was the highest total in the major leagues from 1939 to 1960, the highest National League total from 1931 to 1997, and made Kiner the first National League player with two fifty-home run seasons; Kiner also matched his peak of 127 run batted in. From 1947 to 1951, Kiner topped 40 HR and 100 RBI each season. His string of seasons leading the league in home runs reached seven in 1952, when he hit 37. This was also the last of a record six consecutive seasons in which he led Major League Baseball in home runs, all under the guidance of manager Billy Meyer and hitting coach, Pirate great Honus Wagner. He was selected to participate in the All-Star Game in six straight seasons, 1948 to 1953.

On June 4, 1953, Kiner was sent to the Chicago Cubs as part of a ten-player trade. This was largely due to continued salary disputes with Pirate general manager Branch Rickey, who reportedly told Kiner: "We finished eighth with you, we can finish eighth without you." Ralph wanted a raise from his salary of $65,000. Kiner had been the victim of a constant barrage of criticism by Rickey, who launched a bizarre negative publicity campaign aimed at his top trade bait. The Pirates GM even complained "if you had eight Ralph Kiners on an American Association team, it would finish last." The owners and manager Billy Meyer had been fighting to keep Kiner and managed to ward off Rickey's attempts to deal him away for over a year - Branch had begun his campaign by spring training in 1952.

In 1961, Kiner made his way into the broadcast booth with the Chicago White Sox. The next year, Kiner, along with Lindsey Nelson and Bob Murphy started announcing the games of the expansion New York Mets in New York. One of his duties was to do a post-game show known as "Kiner's Korner".

As an announcer, Kiner gained additional renown for his often unintentionally funny utterances. He was prone to mis-speaking the names of players; for instance, he called Dwight Gooden "Greg Goossen" and Darryl Strawberry "Darryl Throneberry", in each case harkening back to Mets players of the 1960s. In addition, he came up with colorful phrases such as "Two-thirds of the earth is covered by water and the other third is covered by Garry Maddox" and "If Casey Stengel were alive today, he'd be spinning in his grave."

Despite a bout with Bell's palsy, which left him with slightly slurred speech, Kiner continued doing occasional Mets broadcasts clear through 2013. He was the only broadcaster to survive all of the Mets history, due to Nelson leaving the Mets for the San Francisco Giants in 1979 and Murphy's retirement in 2003 (Nelson died in 1995 and Murphy in 2004). His traditional home-run call - "it is gone, goodbye" or "that ball is gone, goodbye" - became a signature phrase in baseball.

Kiner was inducted into the Hall of Fame in 1975, and the New York Mets Hall of Fame in 1984. The Pirates retired his uniform number 4 in 1987. The Sporting News placed him at number 90 on its 1999 list of "The 100 Greatest Baseball Players," and he was one of the 100 finalists for the Major League Baseball All-Century Team that year.

He passed away on February 6, 2014 at the age of 91, peacefully from natural causes. The Mets decided to honor him with a ceremony before their first game of the year on March 31st and by wearing a patch in his honor on their uniform that season, depicting his initials and a microphone, while the Pirates wore his number 4 in a circle on their right sleeves.

Sources include Pat Doyle's Professional Baseball Player Database, The International League: Year-by-Year Statistics by Marshall Wright and On a Clear Day, They Could See Seventh Place by George Robinson and Charles Salzberg

"I try to hit the ball as hard as I can every time I swing." Ralph Kiner.

"Kiner looks like he's going to be the best [outfielder] we've ever had." - Pirate manager Frankie Frisch, before prospect Ralph Kiner ever played a major league game

Some or all content from this article is licensed under the GNU Free Documentation License. It uses material from the Wikipedia article "Ralph Kiner".