In 1999, the Major League Baseball All-Century Team was selected. An expert panel compiled a list of the 100 players since the turn-of-the-century and fans voted for the greatest players. The top two players from each infield position, the top nine outfielders, and the top six pitchers were placed on the team. There were some notable omissions, and a Blue Ribbon committee added five players who did not garner enough initial votes. 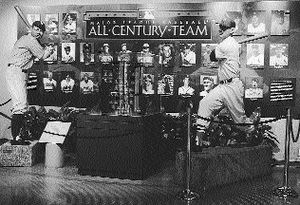 Display at the Hall of Fame.

The players were presented in a ceremony, emceed by Ford Frick Award broadcaster Vin Scully, at Turner Field before Game 2 of the 1999 World Series. Every living player named to the team attended the ceremony.

There was a controversy over the inclusion of Pete Rose, who had been banned from baseball for life ten years earlier. Many questioned Rose's presence on a team officially endorsed by Major League Baseball. Fans at the stadium during the introduction of the team were supportive, giving him a standing ovation. An aggressive and negative post-ceremony interview by NBC Sports' Jim Gray resulted in further public sympathy for the disgraced Rose.

Four then-active players made the roster: Roger Clemens, Cal Ripken, Jr., Ken Griffey, Jr. and Mark McGwire. However since 1999, Griffey's and McGwire's selections have become more disputable. At the time of his induction, Griffey was 29 years old, in his prime, and appeared headed towards all-time stardom. In recent years, Griffey's ascent was subsequently derailed by a series of injuries; missed around 370 games (over two seasons) from 2001 to 2005. McGwire's accomplishments were fresh in public memory, having broken Roger Maris' single-season home run record in the previous season. However, McGwire has since become entangled in the ongoing steroids controversy, and some now question the validity of his career numbers.

Some fans were unhappy that no Latino players had been elected, in particular Roberto Clemente, who had finished 10th among outfielders, just missing the cut. In 2005, the MLB announced its Latino Legends Team. No Negro League stars were chosen for the team; Satchel Paige, 9th among the voting for pitchers, received the most support.