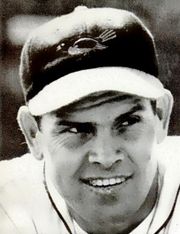 "He's smooth fast. He throws with such ease that he doesn't seem to be bearing down very hard, and his speed takes you all the more off stride." - Ralph Kiner

Robin Roberts played 19 years in the big leagues, primarily with the Philadelphia Phillies, winning 286 games. One of baseball's great pitchers of the 1950s, he was a workhorse who eight times had over 20 complete games in a season and averaged over 300 innings pitched during a nine year period. He won 20 or more games in six seasons, and at least ten games in 16 ML seasons. .

The son of a Welsh immigrant coal miner, Roberts was born in Springfield, Illinois and attended Lanphier High School, where he was a three sport star. After graduation, he earned a basketball scholarship to Michigan State University but instead served in the Army during World War II. After the war, he did attend Michigan State, where in addition to basketball, he also played baseball. He became a star on the diamond, throwing a pair of no-hitters during his collegiate career, including one against the school's rival, the University of Michigan. He graduated with a degree in physical education in 1947.

After graduation, Roberts was sought after by several major league clubs, eventually signing with the Philadelphia Phillies for a $25,000 bonus. He began his pro career with the Wilmington Blue Rocks of the Interstate League in 1948. His stay in the minors was brief: after winning 9 of 10 decisions and posting a 2.06 ERA, he was called up to the majors, where he would spend the next eighteen-plus years.

Roberts was 7-9 in his rookie campaign of 1948 and posted a .500 record the following summer. He enjoyed a breakout season in 1950 Phillies, winning 20 games (the first Phillie to accomplish that feat since 1917) while leading the National League with 39 games started and 5 shutouts. He teamed with Curt Simmons to form a one-two punch on the mound for the "Whiz Kids" club that went on to capture the NL pennant. In that fall's World Series versus the New York Yankees, he started Game Two, allowing just one run through nine innings before giving up a game-winning home run to Joe DiMaggio in the tenth. The Phillies were swept by the Yankees, and Roberts would never play in the postseason again after that year. 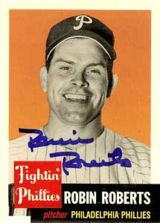 Despite the fact that his club fell to fifth place and below .500, Roberts won 21 contests in 1951 and again paced the NL with 39 games started. The following summer, he won 28, the highest total in the NL since 1935, and earned The Sporting News Pitcher of the Year Award. He won 23 games in both 1953 and 1954 while leading the NL in strikeouts both years. He was again named Pitcher of the Year by The Sporting News in 1955, when he put up a 23-14 mark for a fourth place team.

In 1956, Roberts won 19 games, the first time in seven seasons he failed to reach the 20-win plateau, and his ERA ballooned to 4.45, but he was selected a National League All-Star for the seventh straight year. The next year, he went 10-22, leading the NL in losses. After hovering around the .500 mark the next three summers, he went 1-10 with a 5.85 ERA in 1961. Following that season, his contract was sold to the New York Yankees, who released him before he had made an appearance for the team.

Signed by the Baltimore Orioles in 1962, Roberts put up 42 wins in three and a half seasons with the club. After being let go by the O's, he spent about a year with the Houston Astros and part of a season with the Chicago Cubs. Fourteen games shy of 300 wins, he tried to stay in the game in 1967, pitching at age 40 for the minor league Reading Phillies (where one of his teammates was 21-year-old Larry Bowa). He was 5-3 with a 2.48 ERA for the club, but arm trouble ended his comeback attempt. 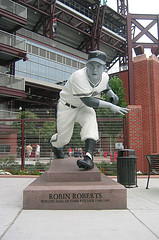 Roberts ended his career with 286 wins and a 3.41 ERA while striking out 2,357. He threw 305 complete games and had 45 career shutouts, and for a long time held a major league record with 505 home runs allowed; he was passed by Jamie Moyer in 2010. He retired as the Phillies career leader in wins and strikeouts (both later broken by Steve Carlton) and still holds the club mark for games pitched, complete games, and innings pitched. He was elected to the Baseball Hall of Fame on January 22, 1976 by the Baseball Writers Association of America.

Following his playing days, Roberts was the head coach the the University of South Florida from 1977 to 1985. He later spent time as a minor league instructor in the Phillies organization. A statue of him was erected outside Citizens Bank Park in 2004. Roberts died at home in 2010, aged 83. His son Dan Roberts coached the Army baseball team and in the Phillies minor league system

"For two generations of fans, he symbolized the best in athletic competition. Day after day he went out there and threw that high, hard one down the middle, a marvelously coordinated man doing his job. If he had pitched for the Yankees he might have won 350 games." - Author James A. Michener