"Joe DiMaggio was the greatest all-around player I ever saw." - Ted Williams

Joe DiMaggio was a huge star who won three MVP awards and has one of the highest career slugging percentages of all time. He was married to actress Marilyn Monroe for a time, and boefore that to another actress, albeit less famous, Dorothy Arnold. He holds the record for the longest hitting streak in major league history, 56 games in 1941. It was considered such a huge accomplishment that he beat out Ted Williams for the 1941 American League Most Valuable Player Award, even though Williams hit .406 that season - the last player ever to bat above .400. DiMaggio was a star from the moment he reached the major leagues: in his first month with the New York Yankees, in May of 1936, he set an all-time record by getting 48 hits, the most of any rookie in his first month in the big leagues.

He was the brother of Dom DiMaggio and Vince DiMaggio, both of whom had substantial careers of their own. Joe and Vince were teammates on the 1933 San Francisco Seals with the 18-year-old Joe hitting .340 and the 20-year-old Vince hitting .333. Dom was also with the Seals, but at a later time.

DiMaggio was in ten World Series and was named to thirteen All-Star teams. However, his statistics and accomplishments would have been even larger if he had not missed several years due to World War II.

Joe was nicknamed "Joltin' Joe" for his speed on the basepath. In high school, he was part of an efficient double play combination with with future infielder/coach/scout Dario Lodigiani. 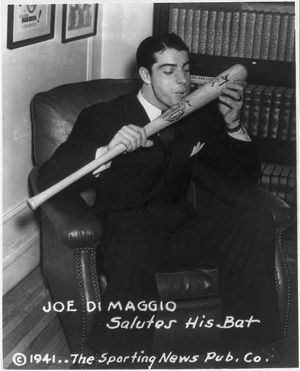 Joe DiMaggio salutes his bat in 1941

He enlisted in the U.S. Army on February 17, 1943 without even notifying the Yankees. He was stationed at Santa Ana airbase in California where he played for the base team and soon ran up a 13-game hitting streak. Assigned to the 7th Army Air Force, DiMaggio arrived in Hawaii on June 3, 1944. The day after he arrived he played for the Hickam Bombers and, despite not having played in six weeks, blasted a 435-foot home run out of Honolulu Stadium. Much of his 1944 season, however, was hampered by recurring stomach ulcer problems. In January 1945, DiMaggio was transferred to Atlantic City, NJ to recuperate from his ulcer problem.

Because DiMaggio was such a steady player, it is hard to pick his best year with the bat. It might, however, be 1941, which was also the best year of Ted Williams. DiMaggio was MVP that year, finishing third in batting, third in OBP and second in slugging. He was first in RBI and Total Bases, second in Runs Scored, third in Hits, second in Doubles, fourth in Triples and Home Runs, and second in Adjusted OPS+. Aside from the bat, he did his usual excellent fielding in center field that year. 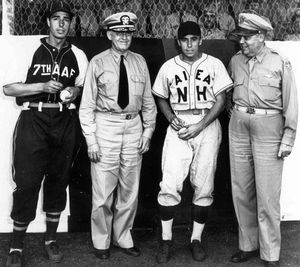 When he retired, he was fifth on the all-time home run list. He has the best strikeout to home run ratio of any player in history: he hit 361 home runs while striking out only 369 times, for a lifetime 1.02 ratio. When asked why he played so hard he said, "because there might be somebody out there who's never seen me play before."

Following his playing days, DiMaggio was an Oakland Athletics coach in 1968 and 1969.

DiMaggio was in the news following the 1989 earthquake in the Bay Area. His home (where he lived with his sister) was in an area that suffered fires after the quake, and many residents were unable to return home at first due to concerns about whether the homes were habitable. In later life he moved to Florida, where he died in 1999 at the age of 84.

"He was a shy, meticulous man. He cooked for himself. He pumped his own gas, shined his own shoes." - attorney Morris Engelberg about DiMaggio in later life

DiMaggio had a children's hospital named after him and was well known for his ads for Mr. Coffee. He was further idolized in the Simon and Garfunkel song Mrs. Robinson, from the movie The Graduate (1968):

Where have you gone, Joe DiMaggio?


A nation turns its lonely eyes to you
(woo woo woo)
What's that you say, Mrs. Robinson


'Joltin Joe' has left and gone away?

He is also mentioned in Ernest Hemingway's The Old Man and the Sea, as Santiago would like "to take the great DiMaggio fishing." He is sure DiMaggio would fish because his father was a fisherman. In 2003 he was elected to the Pacific Coast League Hall of Fame. On July 20, 2012, the United States Postal Service issued a commemorative stamp with his likeness as part of a series of four stamps honoring Hall of Famers. 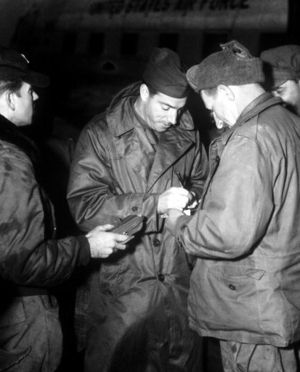 DiMaggio visits the troops in Korea in 1950 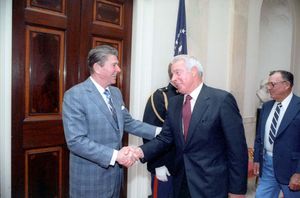 Ronald Reagan and DiMaggio in 1981