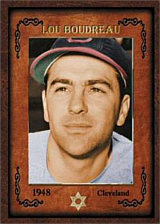 "He was the greatest shortstop I ever saw. He was afraid of nobody. He was a great manager, teammate and friend. Just a great man. There is not a more gracious man than Lou Boudreau." - Bob Feller 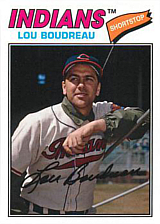 Lou Boudreau was a Hall of Fame shortstop and manager. He led American League shortstops in fielding percentage 8 years in a row, tying the all-time record. He had a 120 OPS+, made 8 All-Star teams and guided the Cleveland Indians to their second World Series title as a player-manager. A career .295/.380/.415 hitter, Boudreau had a good combination of batting average, extra-base power, batting eye and defense.

The son of a French-American father who played semipro ball and worked as a machinist and a Jewish mother, Lou had a rough family life. His parents divorced when he was young and he did not get along with his stepfather after his mother remarried. Boudreau was raised by his father and brought up as a Christian.

Boudreau was a basketball star in high school, leading his team to a state title and earning an athletic scholarship to the University of Illinois. A two-sport star in college in 1936 and 1937, he was a guard in basketball. He was All-American in basketball and later played for and coached the Hammond Ciesar All-Americans of the NBL, a predecessor to the NBA.

Minor leagues and cups of coffee[edit]

Boudreau signed with the Cleveland Indians in 1938 and was declared ineligible for college play by the Big Ten Conference. Assigned to the Cedar Rapids Raiders, he hit .290/~.371/.420 and was an honorable mention for the Three-I League All-Star team, losing out to Frank Piet. Boudreau fielded .935 at third base. He played one game for the 1938 Indians, going 0 for 1. Lou moved to shortstop in 1939 and batted .331/~.378/.532 for the Buffalo Bisons with 88 runs scored, 32 doubles, 7 triples and 17 home runs in 115 games. He led International League shortstops in average and homers. He also played 53 games for the Indians, hitting .258/.340/.360. He would never return to the minors again.

Lou hit .295/.370/.443 with 101 RBI in 1940, his first full season in the majors, and made the American League All-Star team. In the 1940 All-Star Game, he replaced Luke Appling as a defensive substitute and did not bat. He finished fifth in voting for the 1940 AL MVP, behind Hank Greenberg, Bob Feller, Joe DiMaggio and Bobo Newsom. He tied Rudy York for second in the 1940 AL with 46 doubles and placed in the top 10 in triples, RBI and extra-base hits. The Indians that year were in turmoil, staging a player's revolt against manager Ossie Vitt that earned them the name "Vitt's Crybabies". Boudreau, as one of the youngest members of the team, was not approached during this dispute. Lou led the 1941 AL with 45 doubles and tied Joe Cronin and Bob Harris for the lead with 14 sacrifice hits. He slipped to .257/.335/.415, but his OPS+ remained over 100 as offensive levels fell. In the 1941 All-Star Game, he was 2 for 2 with an RBI after replacing Cronin, singling off of Bucky Walters to score Joe DiMaggio and singling against Claude Passeau. 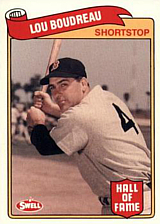 After the Indians finished fourth under Roger Peckinpaugh in 1941 and Peckinpaugh was promoted to general manager, Boudreau wrote team owner Alva Bradley to apply for the manager job. He was hired to manage on November 25, 1941, and became the youngest full-time manager in the major leagues in the 20th century at age 24. Nicknamed the "Boy Manager" by the press, Boudreau held that job with the Indians for the next nine seasons, while remaining the team's regular shortstop most of that time.

In 1944, Boudreau hit .327 to lead all AL batters, two points ahead of Bobby Doerr. His error percentage was .022, less than half the .053 average for shortstops in the 1944 AL; his fielding percentage had been better than average every year so far. He had a .406 OBP, .437 slugging percentage and 145 OPS+. He again did not play in the All-Star Game despite being on the roster. Cleveland fell to 5th at 72-82. He was 6th in voting for the 1944 AL MVP. He finished second in OBP to Indian Bob Johnson, 7th in OPS, tied for sixth in runs scored (91), second in hits (191, behind Snuffy Stirnweiss), 10th in total bases, first in doubles (45), tied for 6th in walks (73, tied with Stirnweiss) and 4th in OPS+. Boudreau's OPS+ fell to 131 in 1945 as he hit .307/.374/.409. He only finished in the top 10 in the 1945 AL in one category, sacrifice hits (his 20 tied George Myatt for second behind Roy Schalk). He made the All-Star team, but once again did not play in the All-Star Game. He still finished in the top 10 in MVP voting and Cleveland was 73-72, good for fifth place. In 1946, Boudreau batted .293/.345/.410 as his OPS+ fell to 116 with other players returning from serving in World War II. Cleveland fell further, to 68-86 and 6th place, their worst mark in 18 years. For his first time as a regular, he did not make the AL All-Star team. He did tie George Kell for the 1946 AL lead in sacrifice hits (15) and was the hardest batter to fan in the whole circuit (one strikeout per 36.8 at bats), finished in the top 10 in average and doubles and placed in the top 10 in MVP voting yet again. On July 14 of that season, he first employed the "Williams shift" on Ted Williams by putting six fielders to the right of second base. Boudreau would later claim that the move reduced Williams' efficacy by 37 percent.

Boudreau bounced back in 1947 with a .307/.388/.424 line for a 128 OPS+. He only struck out 10 times in 538 at bats; again, he struck out the least in the league. In the 1947 All-Star Game, he started at shortstop and hit 5th for the AL, going 1 for 4. He finished in the top 10 in the 1947 AL in average, OBP, OPS, hits, OPS+ and extra-base hits and led with 45 doubles, his third doubles title (each time with exactly 45). Five players got more first-place votes for the 1947 AL MVP, but overall Lou finished third behind only Joe DiMaggio and Ted Williams. Cleveland moved up to 4th with a 80-74 record, helped by the presence of the first African-American in the American League, Larry Doby. Boudreau helped in this endeavor with his support for Doby. After the season, owner Bill Veeck planned to let Boudreau go as manager but the fans rallied behind the player-manager and Veeck kept him on. In a probably unrelated matter, on March 26 of that year, Boudreau forced coach Jackie Price off a train in San Diego after Price let two snakes loose. Price had been a Veeck favorite before the incident, but would be canned after this scene.

Lou's greatest season came with the 1948 Indians. He hit .355/.453/.534 with 18 home runs, 116 runs scored, 199 hits, 106 RBI, 98 walks and only 9 strikeouts in 560 at bats, showing an amazing batting eye with an almost 11:1 BB:K ratio. He had a 165 OPS+ and a fielding percentage above average for AL shortstops for the 10th year in a row. He hit third for the AL in the 1948 All-Star Game; he was retired his first time up but the next time, he hit a fly ball against Ralph Branca that scored Mickey Vernon. Boudreau got 22 of 24 first-place votes for the 1948 AL MVP; DiMaggio got the other two as Boudreau won handily. Lou also won The Sporting News Major League Player of the Year Award. He led the 1948 AL in only AB/K but was second in average to Ted Williams, second to Williams in OBP, fourth in slugging, third in OPS behind Williams and DiMaggio, 5th in runs scored, 3rd in hits, tied for 4th with Vern Stephens in total bases (299), 10th in homers, tied for 7th with Bob Dillinger in doubles (34), 8th in RBI, sixth in walks and second to Williams in OPS+. It was an incredible set of statistics for anybody, let alone a shortstop. Cleveland tied Boston for the best record in the AL, forcing a playoff game. In that contest, Boudreau homered twice and added two singles in a 8-3 win. He hit .273/.333/.455 in the 1948 World Series to help Cleveland to its second World Series title. At 31, he was one of the youngest managers to win a World Series title.

Only two years removed from his greatest achievements, Boudreau was fired as Indians skipper and replaced by Al Lopez on November 10, 1950, and he was released by the club weeks later at his request. He signed with the Boston Red Sox for about $150,000 over two years but saw limited playing time. In 1951, he produced at a .267/.353/.396 clip in 82 games as the backup to Johnny Pesky. For the first time, his fielding percentage was below the AL average at shortstop. Boudreau only played four more games, going 0 for 2 with a run and two RBI in 1952. He also managed the Red Sox from 1952 to 1954, with a best finish of fourth in 1953. In 1955, he moved on to the Kansas City Athletics, where he was skipper for two and a half seasons.

Boudreau transitioned to the broadcast booth for the Chicago Cubs in 1958 and remained a Cubs broadcaster through the late 1980s, except for 1960, when he managed the team. He was inducted into the Hall of Fame in 1970 in his 10th year on the ballot, the same year his #5 was retired by the Indians. In 1954, he was one of the first men to be inducted into the Cleveland Indians Hall of Fame.

The father of Jim Boudreau and father-in-law of pitcher Denny McLain, Boudreau died of heart failure at age 84.