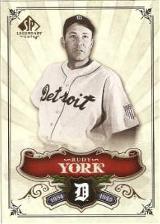 "Baseball men used to say that if Rudy York's skill had matched his spirit, he would have been a cinch for the Hall of Fame." - from York's New York Times obituary

Rudy York was a big star in his time. He was in the top five in the league in home runs nine separate times, and was named to the All-Star team seven times. He appeared in three World Series, getting seven extra-base hits. He was famous for hitting 18 home runs in August of 1937, while a rookie with the Detroit Tigers. This was the one-month record until Sammy Sosa hit 20 in June 1998. From September 11-20, 1940, he had a twelve-game streak in which he collected at least one hit, one run and one RBI in each game. It is the longest such streak in major league history. Over the 12 games, he went 26-for-49 (.531) with 15 runs and 28 RBIs.

Rudy York, surprisingly, became the only player to hit 15 or more home runs in both 1945 and 1946, his first year playing for the Red Sox. This was primarily because of World War II (York did not serve), the substandard materials the ball was made of during this period, and the sudden decline of Chicago Cubs slugger Bill Nicholson.

Primarily a catcher in his first four major league seasons, he then became exclusively a first baseman starting in 1940 (moving Hank Greenberg to the outfield).

"He is part Indian and part first baseman." - an observer, commenting on York's Cherokee ancestry and modest fielding ability

He was an auto mechanic prior to playing in the minors. He won a couple of minor league MVP awards. After his playing career ended, York was a coach for the Boston Red Sox from 1959 to 1962 and also managed and coached in the minors. He served as interim manager for the Sox for one game in 1959.

Late in life, he was working as a painter.