The baseball is the centerpiece of the game. Official baseballs have always been made by winding yarn around a core and covering it with a leather cover, but the exact details of construction have otherwise varied.

According to the rules of baseball:

1.09
The ball shall be a sphere formed by yarn wound around a small core of cork, rubber or similar material, covered with two stripes of white horsehide or cowhide, tightly stitched together. It shall weigh not less than five nor more than 5 1/4 ounces avoirdupois and measure not less than nine nor more than 9 1/4 inches in circumference.

Although not mentioned here, the center is currently made of cork covered with rubber, the yarn is wool, and there are 108 stitches made with red waxed cotton thread. There are also technical rules about allowable standards for the resilience of the ball. Balls are tested by being fired against a wall made of white ash, the wood traditionally used in bats, and their rebound speed must fall within permissible limits.

Early baseballs were hand made and not nearly as standardized as the current models. The basic concept of a string ball with a leather cover was accepted very early in the game's history, but the composition of the core (if a separate core existed), the choice of yarn or string, the exact size and weight, and the design of the leather cover were not standardized. The balls used in the early history of the game were generally softer than modern versions; this was especially true in the very early variants that allowed "soaking", or retiring a runner by hitting him with a thrown ball.

By the advent of professional play, the ball had been standardized into a form that was at least superficially similar to the modern version. The major differences from the modern ball were that the core was made entirely of rubber, which made it somewhat less resilient than the modern ball, and that the string was hand-wound, which made the ball slightly less uniform.

The ball remained about the same until 1911. That year the major leagues adopted the modern cork centered design, in which the solid rubber core of earlier balls was replaced by one made of cork covered with a relatively thin layer of rubber. The cork center was springier than the old rubber core, which made the ball as a whole livelier. Switching to the cork-centered ball caused a temporary uptick in hitting.

Three important changes were made around 1920, two to construction and one to usage. The construction of the balls changed when manufacturers began using machine winders and a higher grade of wool yarn imported from Australia. The manufacturers assured the public that the changes in construction had no impact on the balls' performance, but there was no modern performance testing to ensure that was true. Players and fans certainly believed that the new balls were livelier than earlier versions. Possibly more important was that umpires were directed to replace balls in play any time that they became dirty or scuffed, which ensured that the ball in play would always be easily visible and undamaged.

During the 1920s, the major leagues openly tweaked the ball's construction, generally to make it livelier and raise offensive levels. This peaked in 1930, which featured the highest scoring in the 20th Century. After 1930 the American League and National League diverged in their treatment of the ball. The NL substantially deadened its ball, while the AL ball was kept relatively lively, which resulted in widely diverging scoring between the two leagues. 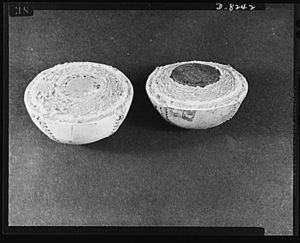 A wartime shortage of rubber caused a temporary change in the ball during World War II. The resulting "balata ball" was relatively dead, which resulted in a large drop in home runs and scoring.

There have not been any publicized changes to the ball's construction since the return of standard baseballs in 1945. This has not stopped persistent rumors that sudden jumps in scoring, particularly those in 1987 and the long-term rise starting in 1993 and again at the end of the 2010s have been a result of "juiced" balls.

MLB home teams supply all of the balls required for the game. According to a 2005 article by the Pittsburgh Post-Gazette, the Pirates supply around 120 balls for each home game[1]. This is addition to the 14 to 15 dozen (168 to 180) baseballs used for batting practice each game day. Each ball is hand rubbed by special mud supplied by MLB by the umpires or their staff to remove the sheen prior to its usage[1].

The balls currently used in major league baseball are all manufactured in the town of Turrialba in Costa Rica, by the Rawlings corporation.