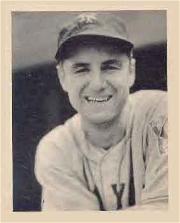 Billy Jurges spent five years in the minor leagues starting in 1927 with the New England League Manchester Blue Sox and by 1931 had made it to the major leagues with the Chicago Cubs. He was the starting Cubs shortstop for most of the 1930s, serving on three pennant winners, the 1932, 1935 and 1938 clubs.

Jurges anchored an infield of Stan Hack, Billy Herman and Charlie Grimm or Phil Cavarretta from 1931 to 1938, after which he was traded to the New York Giants along with Frank Demaree and Ken O'Dea, for Dick Bartell, Hank Leiber and Gus Mancuso. He came back to the Cubs in 1946, retiring in 1947. Jurges led the National League in fielding percentage for shortstops four times, and once had nine consecutive hits, one shy of the then NL record. The light-hitting Jurges played 1,072 games with the Cubs, hitting .254 in over 3,600 at bats. Jurges was an All-Star three times, in 1935 with the Cubs, and in 1939 and 1940 with the Giants. Jurges played in three World Series with the Cubs, hitting .275 in 40 AB.

In 1932, Jurges drew lots of attention. On July 6th, his former girlfriend, lounge singer Violet Valli (née Viola Popovich), called Jurges on the telephone, then entered his hotel room with a gun to attempt suicide (or to shoot Jurges - her intentions were never completely clear). Jurges intervened and took a bullet in the hand and another through the ribs. He missed two weeks of action, then returned, but after a month, lost his starting job to Mark Koenig, who hit a scorching .353 down the stretch. Koenig had been signed as a back-up infielder in early August. Supposedly, Babe Ruth hit his mythical called shot in response to the Cubs' players only voting Koenig half a World Series share, showing up their shabby treatment of a former teammate. In any case, Jurges still managed to hit .364 in the World Series (going 4 for 11), which the Cubs lost and regained his starting job in 1933. There was a similar shooting episode seventeen years later, also in Chicago, involving Eddie Waitkus (who, ironically, also played for the Cubs, but was then a member of the Philadelphia Phillies), by Ruth Ann Steinhagen, a young woman obsessed with him. It's possible that the Jurges incident, rather than the Waitkus shooting, is the real inspiration for the novel and film The Natural.

After leaving the Cubs in 1947, Jurges managed briefly in the farm systems of the Cleveland Indians and Milwaukee Braves, before returning to the coaching ranks with the original Washington Senators in 1956. In July of 1959, still a Washington coach, he was named the surprise manager of the Boston Red Sox, who had fired Pinky Higgins. Jurges was able to rally Boston that year: the Bosox won 44 of 80 games under him - improving from eighth to fifth place - and finally broke the color line with the promotion of Pumpsie Green from AAA. But in 1960 the Red Sox were a team in turmoil, facing the end of Ted Williams' career, and Jurges apparently couldn't handle it; he left the team citing "nervous exhaustion" on June 8th and was fired two days later, on June 10th. It was his last managerial job, although he spent many years scouting for the Houston Astros, the second Washington Senators club and the Texas Rangers.