Inducted into Hall of Fame in 1975 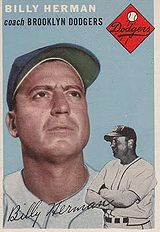 Hall of Fame second baseman Billy Herman played 15 years in the major leagues and was a perennial All-Star. He was in the top five in MVP voting three times and played in four World Series, ending up on the losing end each time.

Named after William Jennings Bryan, Herman played parts of four years in the minors with the Louisville Colonels (and never hit below .305 during that span) before his contract was purchased by the Chicago Cubs for $30,000 in August 1931. He made his debut on August 29th against the Cincinnati Reds and hit a single off Si Johnson in his first at-bat. The next summer, in 1932, he appeared in all 154 games as his team won the National League pennant. He had perhaps his best season at the plate in 1935, when he hit .341 and led the NL with 227 hits and 57 doubles, as Chicago captured another NL crown. The Cubs won another pennant with Herman in the lineup in 1938.

Herman was dealt to the Brooklyn Dodgers in May 1941 and helped them win their first pennant that year since 1920. However, his playing time in the World Series was limited by a torn muscle and Brooklyn fell to the crosstown New York Yankees. After driving in a career-high 100 runs for the Dodgers in 1943, he entered the Navy in March 1944. According to Baseball in Wartime, he played service ball at various Pacific islands. He was discharged in December 1945.

Coming back to the Dodgers in 1946, Herman was traded to the Boston Braves later that year. After that season, he was traded to the Pittsburgh Pirates, with whom he spent 1947 as the club's player-manager. Following his major league playing career, he was a player-manager with the Minneapolis Millers in 1948 and played for the Oakland Oaks in 1950 (hitting .307 as a 40-year-old).

Herman didn't usually lead the league in offensive categories but he was often in the top ten, as indicated by his Gray Ink score of 134. Defensively, on the other hand, he was often #1 in the league in put-outs, assists, range factor or fielding percentage at second base.

"If I were managing a team, I'd never let my catcher give signals with Herman on second base. I'd have some other player give them. But even then I couldn't bet Billy wouldn't steal them." - Larry MacPhail.