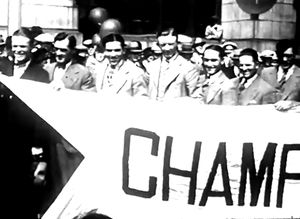 After the 1955 season, the Oaks relocated to Vancouver, BC, Canada, and Oakland was without professional baseball until the Oakland Athletics of the American League began play in 1968, after relocating from Kansas City. An oddity occured when a later Vancouver team, the Canadians, was relocated to Sacramento, CA in 1999 and became the Oakland Athletics' AAA affiliate. With the RiverCats' new homepark, Raley Field, not yet completed the team played its first homestand in Oakland. Although it was at McAfee Coliseum rather than Oaks Park and a different Vancouver franchise, it still reversed a 44-year-old move.