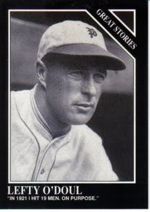 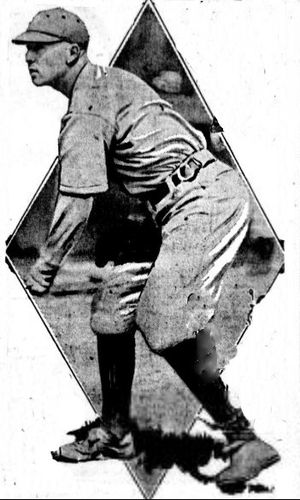 Lefty O'Doul was a .349 career hitter in the majors who won two batting titles. His career batting average puts him at # 4 on the all-time list, although his big-league career was short with only a bit more than 3,000 at-bats. For many years after he retired, he had stout proponents who said he belonged in the Hall of Fame. In 2007 voting by the Veterans Committee, he received 18% of the vote.

He started his career as a pitcher, playing four years in the American League with the New York Yankees (he was a teammate of Babe Ruth) and Boston Red Sox in his early 20's before hurting his arm. He became an outfielder and returned to the major leagues after some outstanding seasons in the minors.

He also helped bring baseball to Japan, travelling there often.

He is remembered for working with a couple of young players on their hitting - Joe DiMaggio and Willie McCovey. He was modest about his work, though, saying:

"I refuse to take any credit for (DiMaggio). I was just smart enough to leave him alone." - Lefty O'Doul

The other two DiMaggios also played for O'Doul when he managed in San Francisco.

The character of Roy Hobbs, from the novel and film The Natural, is partly based on O'Doul.