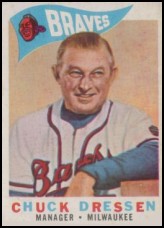 Chuck Dressen played both major league baseball and professional football, and also was a manager for 16 years, twice winning the National League pennant. He was also known as "Charlie Dressen".

Dressen played as a quarterback for George Halas in the American Professional Football Association, prior to its name-change to the NFL, and then played a couple more seasons in the NFL. Moving to professional baseball, he had a couple of successful years with the St. Paul Saints.

Dressen took over as Dodgers skipper in 1951, finishing in a tie for first with the New York Giants that year. He was the one who chose to use Ralph Branca in relief of Carl Erskine in the third game of the 1951 playoffs, with the result being Bobby Thomson's Shot Heard 'Round the World. After leading the club to the World Series in 1952 and 1953 - but losing both times to the Yankees, he demanded a three-year contract from team principals Walter O'Malley and Buzzie Bavasi. Instead, owner O'Malley fired him and replaced him with Walter Alston, a man who would go on to manage the club for more than two decades, always on a one-year contract. Dressen has been criticized in recent years for allegedly having worn out his Dodger pitchers by World Series time, thus rendering them generally ineffective during post-season play. Later, Dressen moved on first to manage the Pacific Coast League's Oakland Oaks for one year, and then the Washington Senators for a little more than two seasons (1955-1957) before reconciling with the Dodgers, serving on Alston's coaching staff in Los Angeles in 1958 and 1959.

Dressen took over as manager of the Milwaukee Braves in 1960 and led the club to a second-place finish that year but was replaced by Birdie Tebbetts the following season. He became the Detroit Tigers skipper in 1963. He missed the beginning of the 1965 season after having a heart attack but was back in the dugout by May. On May 16, 1966, he suffered another one and was replaced by Bob Swift. Dressen died three months later at age 67 (amazingly, and quite sadly, Swift died just 2 months later).

In The Boys of Summer, he told writer Roger Kahn that he had never read a single book in his life, although he bravely selected "Dictionary Quiz" for his category when he appeared in a 1950s episode of Groucho Marx's quiz show "You Bet Your Life." He may not have been book-smart, but he was a baseball lifer with tremendous knowledge of the game, behind his gruff exterior and his liberal use of curses.