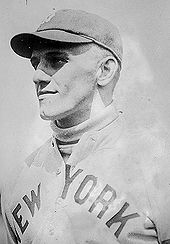 George Halas, better known as a legendary football coach and owner, played one season in the major leagues. He had been a three-sport athlete at the University of Illinois, and after playing minor league ball, came to the majors as an outfielder with the New York Yankees in 1919. It was the year before Babe Ruth came to the Yankees, and the outfield consisted of Ping Bodie, Sammy Vick, and Duffy Lewis. In 22 at-bats, Halas' batting average was .091.

He spent World War I at Great Lakes Naval Training Station; he earned a military discharge by leading the football team to championship.

Halas didn't waste any time moving to football. In 1920 he coached the Decatur Staleys, for whom future major leaguer Chuck Dressen played quarterback. The following year the team became the Chicago Bears.

He was a charter member of the Pro Football Hall of Fame in Canton, Ohio, and won 324 games as an NFL coach.

His brother Walter Halas coached baseball at the University of Notre Dame.