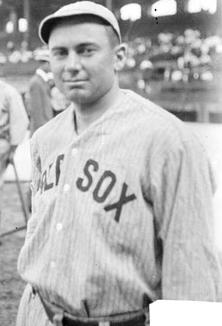 After growing up in the tough sections of San Francisco, Lewis played baseball up and down the coast of California, finally gaining the attention of big league scouts. He covered the outfield with strong, quick strides, and packed punch in his short right-handed swing. In 1910, he joined Tris Speaker and Harry Hooper in Boston's starting outfield as the left fielder, and the celebrated trio helped the Red Sox to a pair of World Series titles. ¸ 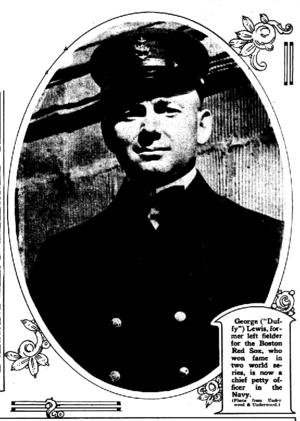 Duffy Lewis in his World War One Navy uniform.

He became so adept at fielding along the steep incline in front of Fenway Park's left-field fence that it became known as "Duffy's Cliff." Despite being one of the few players apparently liked by Ty Cobb, Lewis's fondest memories included throwing out Cobb as he attempted to stretch hits. At bat, he was a reliable line drive hitter and good RBI man, with a personal high of 109 in 1912.

In 1914 he became the first major league player to pinch hit for Babe Ruth, then a Red Sox rookie pitcher. The next season, he saw Ruth's first homer; in 1935, as traveling secretary for the Boston Braves, a post he held for 30 years, he saw Ruth's last.(EC)

In all, Lewis played for three Red Sox title teams, but after missing the entire 1918 season while he served in the U.S. Army, his career was essentially over.