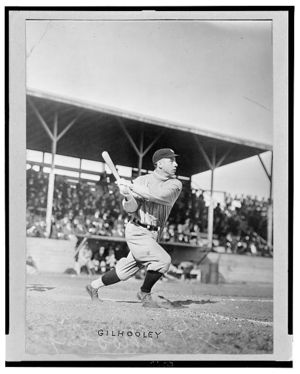 Nicknamed "Flash" because of his speed as a youngster, outfielder Frank Gilhooley played nine years in the majors and nearly two decades in the minors. In 2008, he was elected to the International League Hall of Fame.

Gilhooley attended St. John's College in his hometown of Toledo, OH and began his minor league career in 1910. While playing for the Adrian Yeggs of the Southern Michigan League in 1911, his contract was purchased by the St. Louis Cardinals for $1,500. He made one appearance for the Cardinals that summer and was one of the youngest players in the American League. After seeing little big league playing time in 1912, he was sold to the New York Yankees in 1913 and hit .341 in 93 at-bats that summer.

Gilhooley continued to play mostly in the minors until 1916 when he saw significant playing time in the Yankees outfield. He hit .278 that year and had the second-highest average among New York regulars. After serving as a fourth outfielder for the club in 1917, he was again a starter in 1918, hitting .276, which was the highest among the team's regular outfielders. After that season, he was traded to the Boston Red Sox, where he backed up outfielders Babe Ruth, Harry Hooper, and Braggo Roth in 1919, his final big league campaign. He continued in the minors for another decade, ending his career by serving as player-manager of the Jersey City Skeeters in 1928 and part of 1929.

His son, Frank Gilhooley, has been a long-time broadcaster for the Toledo Mud Hens.