The name Mud Hens caught on as a nickname during the 1896 season. Due to the City of Toledo's Blue Laws, the team had to play its sunday games at Bay View Park outside the city limits. Bay View Park was situated in a marsh that was heavily populated by the American Coot. Coots were commmonly known as Mud Hens, and the name stuck.

The Mud Hens were joined Columbus, Louisville, Indianapolis, Milwaukee, Minneapolis and St. Paul as the charter members of the minor league American Association in 1902. The American Association played at the highest level of minor league baseball. Competion within the AA was tough, and Toledo did not fare well, and only won two pennants throughout these years. The Mud Hens did so poorly throughout these years, in fact, that they finished in the bottom half of the league during 70% of these seasons. Toledo played in the American Association through the 1913 season. In 1914 team owner Charles Somers, who also owned the Cleveland Indians, moved the Mud Hens to Cleveland to keep the Federal League from locating a rival team there. During this time, they played as the Cleveland Soumichers.

The American Association returned to Toledo in 1916, with the Toledo Iron Men 1916-1918. The team was renamed the Toledo Mud Hens in 1919. During the years of 1916 and 1925, the Hens only broke .500 during the 1920 season. The club broke their slump in 1926 with the arival of Casey Stengel. In 1927, Stengel had assembled a veteran team that won the American Association pennant, and the only Junior World Series title in club history. Following the end of the Stengel era, a local businessman by the name of Waldo Shank bought the team and sold them to the Detroit Tigers.

In mid-season 1951, the Tigers sold the team. Halfway through the 1952, the team left for Charleston, WV where they operated as an independent barnstorming team (keeping the Toledo Mun Hens name) within the American Association. In 1953, the Braves moved their Milwaukee Brewers club to Toledo to fill the gap left by the Hens. The team was known as the Toledo Glass Sox (or Toledo Sox). The Sox won the American Association pennant in 1953. In 1956, the franchise was moved to Wichita, KS, and Swayne Field was razed.

Notable players during this era:

Carl "Ducky" Walinski, a local achondroplaisic teenager, was hired by the Mud Hens in 1925 at the age of 15. His duties-for 25 cents per day- announcing games, running errands for players, cleaning and caring for uniforms, shoes, and the club house, as well as entertaining the crowds. Ducky later earned local fame by traveling from pub to pub on roller skates (often in the company of a goat) advertising Buckeye Beer. During this time, his nickname changed to "Bucky" in honor of the product he promoted.

In 1965, the Richmond, VA franchise was purchased, and baseball returned to Toledo. The team revived the Mud Hens name, and found a new home in Ned Skeldon Stadium, a converted horse racing track on the Lucas County fair grounds. The new Mud Hens became the AAA franchise of the New York Yankees, and settled into the International League. In 1967, the Detroit Tigers replaced the Yankess as the parent organization, and the Mud Hens won the International League title and their first Governors' Cup.

1974-1977 were split between the Philadelphia Phillies and the Cleveland Indians. In 1978, the Minnesota Twins took over as the Mud Hen's Parent organization, and the Mud Hens were featured on M*A*S*H, a popular TV series in the 1970s. Corporal Maxwell Klinger, played by Jamie Farr (both Klinger and Farr are from Toledo), wore a Mud Hens jersey or cap in many episodes, and the team was a frequent topic of conversation for the character. The success of the series brought the Toledo Mud Hens to international fame, and the Mud Hens made the playoffs three of nine seasons with the Twins. In 1987, the Mudhens and Tigers reunited their association. The Hens remained at the bottom of the International league throughout the rest of their life at Ned Skeldon Stadium. 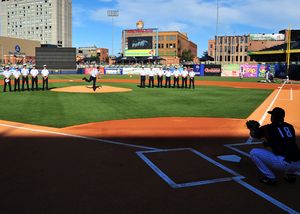 In 2002, a new stadium, Fifth Third Field was built in downtown Toledo. The stadium was named best minor league ball park in America by Newsweek that year, and the Mud Hens finished at the top of their division. Things only got better for the Mud Hens with the introduction of Larry Parrish as manager. In 2005 and 2006, the Toledo Mud Hens won back-to -back Governors' Cup championships. The Hens continue to break minor league attendence records as the most famous team in Minor League Baseball.

Notable Players from this era: