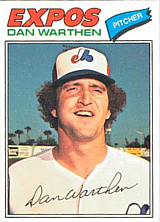 On June 17, 2008, Warthen was called up to the majors to replace Rick Peterson as the New York Mets pitching coach. He stayed on the job until the end of the 2017 season. In 2018, he joined the Texas Rangers as assistant pitching coach, working with former pupil Doug Brocail, who was now the team's pitching coach. He was let go after the season, along with Brocail.