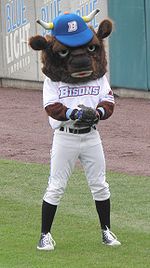 The Buffalo Bisons of the International League and briefly in Triple-A East, were more affected by the COVID-19 pandemic than any other club that made it through MLB's 2021 Minor League Reorganization. The Toronto Blue Jays farmhands play their home games at Sahlen Field in Buffalo, NY - except when the pandemic upended things.

Like all affiliated clubs, they didn't play at all in 2020 - although Sahlen not only didn't sit empty but also got a renovation, because border restrictions made it impossible for the parent Blue Jays to play in Canada. However, no fans were allowed into any MLB games during the 2020 regular season.

When the situation hadn't improved enough for the Blue Jays to start their 2021 home schedule in Canada, they played their April and May home games at their spring training home in Dunedin, FL. That term was decided in increments, and the Jays never wanted to play there into the summer - which in Florida means oppressive heat and continual threat of rain. For the next part of the campaign, they again settled on Sahlen. Forced to find another home, the Bisons moved to Trenton, NJ - playing when at "home" as the "Trenton Thunder". That gave Trenton - which had just lost its Double-A team in the reorganization - a last hurrah, and in the top tier: Triple-A. The Thunder, now in the MLB Draft League, were again displaced - playing their home games at Rider University. The Bisons did play as the Bisons on the road, and their statistics are listed under "Buffalo".

The Jays' second tenure at Sahlen required more renovations. The first had a short-time window but no need to address hosting fans; the second allowed more time but needed to accommodate fans - presumably more than usual as time went along and Coronavirus restrictions were relaxed. As a result, after the dust had settled, the bumped-around Bisons had the solace of having the finest ballpark in the minors.

The Jays, hoping to return to Toronto later in the season and given the fluidity of the situation, made only incremental commitments to playing at Sahlen Field. Five days before the last was to expire on July 21st, the Canadian government approved the Jays' request to return to Rogers Centre starting on July 30th. The Bisons, on the road from July 27th through August 8th, had said previously they would need about two weeks to transition back, and after the official announcement about the Jays' return to Toronto, the Bisons explained that they hoped to return to Sahlen Field for their homestand starting on August 10th. The collegiate Trenton Thunder then announced they would play their last 2021 homestand - August 3rd through 8th - at Trenton Thunder Ballpark.

The current Bisons franchise moved from Wichita, KS, during baseball's 1984-85 off-season, where they played as the Wichita Aeros of the American Association. This returned Buffalo to the ranks of Triple-A teams. (Don't tell 'em the plural of "bison" is "bison" - they know!)

From 1924 through 1960, the Buffalo Bisons played at Offermann Stadium, and in 1961, the club moved to War Memorial Stadium. However, the park was located in a downwardly-mobile neighborhood in East Buffalo, and became downright dangerous after the riots that occurred in the summer of 1967. The Bisons switched most of their night games to Hyde Park in Niagara Falls, NY, for the following seasons, as attendance dwindled to a trickle. On the verge of bankruptcy, the franchise was awarded to the parent Montreal Expos in June, 1970, and immediately moved to Winnipeg, MB, where they were renamed the Winnipeg Whips.

Left without baseball for the next eight full seasons, Buffalo received a new team in 1979 when the Jersey City A's of the Double-A Eastern League folded. The new team was an instant success at the gate, as the area around War Memorial Stadium had begun to recover, leading to the city moving up to the Triple-A American Association in 1985. Since 1988, the Bisons have played their home games in Sahlen Field (known under a variety of names during that period). Since moving to their present home, the team has become one of only two minor league clubs to draw over a million fans in a season. The Bisons have done it six times, while the Louisville Redbirds - who did it first - never repeated the feat.