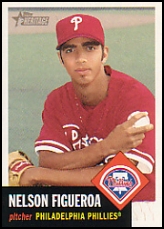 Nelson Figueroa is the only major league player to come out of Brandeis University through 2012. He pitched in the minor leagues from 1995-2006, winning in double digits six times, while going just 7-17 in major league trials. In the 2007 Taiwan Series, Figueroa dominated, going 3-0 to win MVP honors and help the Uni-President Lions to the title. Figueroa was the second foreigner (after Tetsu Yofu) and first non-Asian to be named Taiwan Series MVP. Figueroa had been a late addition to the Lions, after spending the bulk of the season in the Mexican League with the Dorados de Chihuahua, with a 4-0, 3.00 record in the 2007 CPBL season. He had gone 8-6 with a 3.87 ERA for Chihuahua.

Figueroa continued to shine in the postseason in the 2007-2008 Dominican League, going 4-0 with a 1.45 ERA for the Águilas Cibaeñas to help them to their 20th title. Since he joined the team late, he was not eligible for the 2008 Caribbean Series; he went instead to the Yaquis de Obregón for the Series, his 4th team at least in under a year. He was 1-0 with a 0.82 ERA in the Series to lead the Yaquis staff. He had now won 13 of 14 decisions between the CPBL season, the Taiwan Series, the Mexican Pacific League, the Dominican League playoffs and Caribbean Series.

Figueroa returned to Major League Baseball with the New York Mets in 2008. The Mets had originally picked him in the 30th round of the 1995 amateur draft, but he had been traded to the Arizona Diamondbacks in 1998, two years before he made his major league debut. He went 3-3, 4.57 in part of a season with the Mets.

Nelson Figueroa played with the Puerto Rican national team in the 2009 and 2013 World Baseball Classics. As Puerto Rico's ace in 2013, he turned in a tremendous performance in a do-or-die second round game against Team USA on March 15th; he gave up only two hits and a walk over six scoreless innings to send the U.S. down to a 4-3 defeat that eliminated it from the tournament.

After retiring as a player he became the pitching coach of the Staten Island FerryHawks of the independent Atlantic League in 2022. During the season, he came out of retirement as age 48 to help out on the mound when the team found itself short of arms for a doubleheader on August 9th. He allowed 8 runs on 10 hits over a 7-inning complete game, so it wasn't quite the Cinderella story one hoped for.