Note: This page is about the modern (2006- ) World Baseball Classic. For the similarly named five-team 1972 Triple-A tournament, click here. 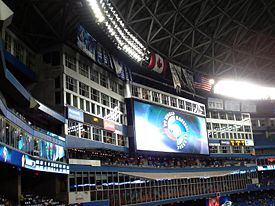 The World Baseball Classic (sometimes abbreviated WBC) is an international baseball tournament that was first held in 2006. It is sanctioned by the International Baseball Federation and supported by Major League Baseball, Nippon Professional Baseball, the Korea Baseball Organization, the Major League Baseball Players Association, and other professional baseball leagues and their players associations from around the world. The second WBC was held in 2009, with subsequent tournaments held every four years thereafter.

The World Baseball Classic was the first international baseball tournament to feature players currently playing in the major leagues. The Olympics conflicted with the MLB schedule, and after professional players were allowed to play in 2000 the league offered only token cooperation, not allowing any players on a MLB team's 40-man roster to participate. The World Cup of Baseball also had the same problems, and historically has not had major leaguers participate. In addition to providing a competition between the top players in the world, the World Baseball Classic was created in order to further promote the game and Major League Baseball around the globe.

The tournament was announced in May 2005 by Major League Baseball and the Major League Baseball Players Association. The MLB had been attempting to create a tournament for at least two years, with the tournament expected to be played in March 2005. However negotiations with the MLBPA, team owners, and sanctioning by the International Baseball Federation caused the delay. The owners, most notably New York Yankees owner George Steinbrenner, had been concerned about their star players being injured in the tournament. The union's objection was with drug testing; MLB wanted the stricter international standards in place for the tournament, while the union wanted the current MLB standards in place. Eventually, a deal was reached on insurance for player contracts and a compromise was reached on drug testing. MLB teams would not be able to directly block their players from participating.

Similarly, Nippon Professional Baseball and its players' association, the Japan Professional Baseball Players Association, had a disagreement over participation in the tournament. While the owners initially agreed to the invitation, the players' union was concerned about the time of year the tournament was scheduled to take place, as well as their right to be better represented when the next tournament was to be held. After four months of negotiations, NPB officially notified MLB they were accepting the invitation on September 16, 2005. Japan would eventually win the first two Classics. Also at issue before the initial tournament was whether Cuba would be allowed to play games in the United States in spite of sanctions against the country if it advanced to later rounds; that guarantee was obtained only weeks before the tournament began and threatened its cancellation.

The original composition of the tournament was made by invitation and was meant to include all traditional international baseball powers (United States, Cuba, Japan, South Korea), countries that have produced a large number of professional players (Australia, Canada, Dominican Republic, Panama, Puerto Rico, Mexico, Taiwan and Venezuela), and others that reflect the geographic diversity of international baseball (China, Italy, the Netherlands, South Africa). This arbitrary choice of participants left out a few countries as well qualified as those chosen, notably Nicaragua and Colombia, with no mechanism for them to enter future editions of the tournament.

Realizing the problem and wishing to continue to foster the international development of baseball, MLB announced in 2011 that the tournament would be expanded in 2013, with a 16-team preliminary round to be played in the Fall of 2012. That round involved the four teams that failed to win a game in the 2009 Tournament - Canada, Panama, South Africa and Taiwan, plus 12 other teams: Brazil, Colombia, Czech Republic, France, Germany, Great Britain, Israel, New Zealand, Nicaragua, Philippines, Spain and Thailand. The 16 teams were divided into four pools, each playing a double elimination tournament, with the four teams with WBC experience each heading a qualification group. That system allowed two new countries to make their debut in the 2013 tournament, Brazil and Spain (at the detriment of Panama and South Africa. The 2013 tournament saw a new winner, with the Dominican Republic defeating Puerto Rico in the finals to complete the tournament with an unblemished record.

(through 2017, including qualifying rounds)