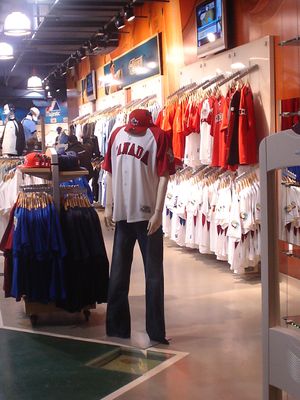 Jerseys and caps to be worn during the 2009 WBC by Team Canada, shown at the Rogers Centre

The Canada national baseball team is a national team of Canada and is controlled by the Canadian Federation of Amateur Baseball. It represents the nation in senior-level men's international competition. The team is a member of the COPABE. Jason Bay, Justin Morneau and Matt Stairs have all played for Team Canada. Their first Gold Medal in an international tournament came in the 2011 Pan American Games, 12 years after their first medal, also in the Pan Am Games. They then repeated at the 2015 Pan American Games; only Cuba had previously won multiple Pan Am Golds in baseball.

Canada made its international debut in the 1967 Pan American Games. They went 1-7 but got an upset win over the Pan Am Games champs, the Cuban national team. Canada had beaten Puerto Rico in game 2 but it was rescinded as Canada had four former US pros on the roster (Ron Stead, Ron Smith, Bob McKillop and John Elias). Al Robertson led the Games in average (.467) and hits (14). Erwin Doerksen got the first run in Team Canada history, Maurice Oakes the first RBI and Glennis Scott the first win.

Canada was 1-9 in the 1970 Amateur World Series, tying Italy for 9th and finishing ahead of only the Netherlands.

Canada tied the Dominican Republic for 6th at the 1971 Amateur World Series, going 4-5. Rick Cruise tied for the Series lead with 7 home runs.

Canada was 9th of 16 teams at the 1972 Amateur World Series, going 8-7 for their first winning record on the international stage.

Canada tied Italy and Nicaragua for fourth in the 1973 Intercontinental Cup with a 4-3 record. Doug Simon led the event with 8 runs while P. Lepage led with four doubles. They beat Puerto Rico, which finished second.

Canada hosted the 1975 Intercontinental Cup and finished fourth at 4-5. They lost the Bronze Medal game by only one run to Nicaragua, just missing their first Medal in a major event.

Canada went 3-6 to finish 8th in the 1977 Intercontinental Cup, ahead of only last-place Venezuela.

Canada fell back to its finish from 12 years prior, going 1-7 to tie Mexico for last in the 1979 Pan American Games

Canada hosted the 1981 Intercontinental Cup and went 4-3 including a 2-1 upset win over Cuba. Perry Lychak's 0.66 ERA led the event.

During the 1982 Amateur World Series, the Canadian squad was 5th once more, this time 5-4. One problem was pitching depth - they hurled two shutouts, but allowed 17 or 18 runs three times. They had several All-Stars in C Larry Downes, OF Doug McPhail and LHP Rod Heisler.

Canada was 3-2 in pool play but did not advance to the second round. Tom Nelson had 12 hits, the most in the 1983 Pan American Games.

Canada was 1-2, tying Nicaragua and Italy for 5th in the 1984 Olympics, ahead of the Dominican Republic. The roster included future major leaguers Kevin Reimer, Steve Wilson and Mike Gardiner.

The Canadian team was 4-9 overall in the 1987 Intercontinental Cup, outscored 121-55 but beat South Korea in the final round to earn a 5th place finish. Rheal Cormier was 3-0 with a 0.57 ERA to tie for the win lead as the main bright spot. Cormier would still be with Team Canada 21 years later, in the 2008 Olympics. Infielder Matt Stairs would last even longer, still playing for Canada 22 years later at the 2009 World Baseball Classic.

Canada was 1-2 in the 1988 Olympics, same as 1984. They tied the Netherlands and Australia for 5th, finishing ahead of Taiwan. Future major leaguers were Rob Butler, Rheal Cormier, Peter Hoy, Greg O'Halloran, Matt Stairs and Dave Wainhouse.

In the 1991 Pan American Games, Canada only was 1-7 to tie the Netherlands Antilles for last despite a better run differential (63-38) than three other teams. They were led by Chris Smeeton (1-0, 1.13). They were the victims of the first Pan American Games no-hitter, thrown by Jorge Valdes.

Canada tied Sweden for 14th in the 1994 Baseball World Cup, ahead of only the French national team. They had one of the oddest tourneys. They handed Japan its lone loss in pool play but lost to otherwise winless Sweden. They lost by one run to Silver Medalist South Korea and by 2 to quarterfinalist Panama but were routed by 3-4 Puerto Rico and the 4-3 US. Jeff Zimmerman (0-1, 4.87) would go on to a be a major league All-Star. 2B Derek Gauthier cracked 3 home runs and slugged .696, while 1B John Cann hit .333/.419/.556.

Canada began the new decade on a rough note in the 2001 Baseball World Cup. They outscored opponents 21-18 but went just 2-5 thanks to three one-run losses - to Panama, Cuba and Australia, the latter two by 1-0 scores against Jose Contreras and John Stephens respectively. It was more notable due to the number of (now) well-known hitters on Team Canada. Jason Bay (.143), Aaron Guiel (.167) and Justin Morneau (0 for 8) all were flailing away. The offensive leader wound up being a Team Canada veteran, CF Jeremy Ware (.333/.400/.556). The staff ERA was a strong 2.07, fifth in the Cup. Brett Gray allowed no earned runs in 13 IP yet still went 0-1 thanks to an unearned run in the loss to Contreras and Cuba. SS Kevin Nicholson hit just .154/.185/.192 but was voted as the Best Defensive Player in the Cup.

In the 2005 Baseball World Cup, they were managed by Jim Baba. Team Canada hit .322, second only to Cuba, but poor defense hurt and their pitching could not compete with the top four teams in their pool. Leading the fine offense was 1B-DH Joey Votto, who hit .333/.371/.833 with 10 runs, 5 home runs (second in the tourney) and 16 RBI. Votto made the All-Tournament team at DH They were 4-4 in round one and failed to advance.

Canada participated in the 2009 World Baseball Classic on home turf, where the games were played in the Rogers Centre in Toronto. Canada first played the Americans and lost 6-5. They then played Team Italy and lost 6-2, causing them to be eliminated from the rest of the tournament. The team faced some criticism at home due to the their lackluster performance, and in particular the performance of team manager Ernie Whitt. In an interview with the Toronto Star, Whitt describes the situation after the loss to Italy: see [1]"Needless to say, everyone in this locker room is very disappointed," Whitt said.

"I think this is one of the toughest losses I've ever been associated with Team Canada."

At the 2010 Pan American Games Qualifiers, Canada won spots in both the 2011 Baseball World Cup and 2011 Pan American Games. They went just 3-4 under skipper Ernie Whitt, barely qualifying for both events, finishing tied for 5th among the 12 entries. Jamie Romak is named MVP after hitting at least four homers while Chris Robinson is honored as the All-Star catcher.

Canada won the 2011 Pan American Games, topping the USA 2-1 in the Gold Medal game, for their first international title. They went 4-1, losing only to Cuba (which dropped their semifinal game against the US). Again guided by Whitt, key contributors included Shawn Hill (2-0), Dustin Molleken (1-0, Sv), OF Tim Smith, 3B Shawn Bowman, 1B Jimmy Van Ostrand (both RBI in the finale) and Andrew Albers (the win in the Gold Medal game).

Canada won all three of its games at the 2013 World Baseball Classic Qualifiers held September 20-24, 2012, in Regensburg, Germany, defeating their opponents by a combined score of 38-9. OF Jimmy Van Ostrand had a tremendous tournament, slugging 1.538 with 4 homers, 9 runs scored and 10 RBI, all of these figures leading or tied for the lead among players in all four qualifying pools. By winning its pool, Canada qualified for the 2013 World Baseball Classic.

Following their strong work in 2015, Canada fell flat in the 2017 World Baseball Classic. It began when big names like Votto, Russell Martin and Saunders did not join the team (Martin was a last-minute cut as he was unable to get insurance to play; as a result, he wound up coaching). They did still have Morneau and Freddie Freeman, but the offense produced just three runs and the team went 0-3, losing to the Dominican Republic, Colombia and the USA. The pitching was so thin the team had to lean on Ryan Dempster (who had been retired for three years) for two of their three starts; he was 0-2 with a 27.00 ERA. Also coming out of retirement, Éric Gagné fared better with 2 1/3 shutout innings on a team that surrendered 21 runs.