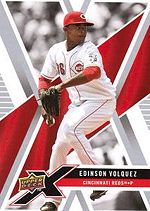 Edinson Volquez is a major league starting pitcher. He was signed by Texas Rangers' scout Rodolfo Rosario as a free agent in 2001 and pitched in the minors in 2002-2004 and parts of 2005-2007 and also played in the majors in 2005, 2006 and 2007. He's one of those rare players whose first and last names are both unique among major league players.

In the majors, he had a record of 3-11 in his first three seasons, after appearing in 20 games. While he has not given up excessive hits in the minors, in the majors in his first 80 innings, he gave up 111 hits, of which 14 were home runs. However, he was only 23 years old in 2007 and was still viewed as a top prospect in spite of his early struggles.

After the 2007 season, he was traded to the Cincinnati Reds with Danny Herrera for Josh Hamilton. There were questions about how little the Reds were receiving in return for the extremely-talented (albeit injury-prone) Hamilton, but Volquez quelled those rapidly by getting off to a great start with his new team in 2008, even as Hamilton was tearing up the American League. Volquez was selected as the Reds' representative to the 2008 All-Star Game and even though he was tagged for a home run and two runs in one inning of work in the Midsummer Classic, he put together an effective second half as well to end up with some sparkling statistics: a 17-6 record, a 3.21 ERA, and 206 strikeouts in 196 innings. Not only was he easily the Reds' best pitcher, outclassing nominal aces Bronson Arroyo and Aaron Harang, he was dominant while pitching for a mediocre team that finished 14 games below .500.

Volquez got the call for the first start for the Dominican Republic in the 2009 World Baseball Classic. He had a horrible first inning against the Dutch national team. He began by giving up a bunt hit to Eugène Kingsale. An error by Miguel Olivo on a Sharlon Schoop bunt followed. Volquez retired Randall Simon and Greg Halman, but walked Yurendell de Caster. He then threw a wild pitch. Sharnol Adriana singled and a Hanley Ramirez error made it 3-0. Volquez threw two shutout innings after that but the damage had been done as the Netherlands went on to a 3-2 upset win.

Volquez' 2009 was cut short by an arm injury. He underwent Tommy John surgery in August, then more bad news befell him as he was on the disabled list at the beginning of 2010. On April 21, it was announced that he had failed a PED test in spring training and that he would begin serving a 50-game suspension the next day, although he would be allowed to continue his rehabilitation at the Reds' spring training site in Arizona, but would forfeit his salary during the period. Volquez explained that the test was caused by a fertility drug used for personal reasons - an excuse used by Manny Ramirez when he was suspended a year earlier - but observers were quick to point out that such drugs are often used to artificially enhance testosterone levels when cycling out of a period of steroids usage. He came back to go 4-3, 4.31, in 12 starts and was picked by manager Dusty Baker to start a game in the NLDS against the Philadelphia Phillies. He was roughed up badly, however, leaving after giving up 4 runs on 4 hits and 2 walks in 1 2/3 innings and was charged with the loss.

He was the Reds' Opening Day starter in 2011, but began the year slowly, going 3-2 with a 6.35 ERA over his first 10 starts. On May 22nd, he was removed from a game against the Cleveland Indians after giving up 7 runs in 2 2/3 innings and gave a rant afterwards, accusing his teammates of not giving him enough offensive support. One day later, the Reds decided to send him down to AAA Louisville officially to work on his command, but also to have him reflect on his attitude. He came back to the Reds after making 13 starts at Louisville (4-2, 2.37), and finished the season with a record of 5-7, 5.71 in 20 starts in the majors. On December 17th, he was traded to the San Diego Padres with Yonder Alonso, Brad Boxberger and Yasmani Grandal in return for pitcher Mat Latos.

On July 19, 2012, Volquez threw a one-hitter facing the Houston Astros at PETCO Park, winning 1-0. The only hit was a squibbler by Matt Downs that bounced off his glove in the 4th inning. It was only the third complete game shutout by a Padres pitcher since the opening of PETCO Park in 2004, belying the ballpark's otherwise well-deserved reputation as a haven for pitchers. He went 11-11 with a 4.14 ERA in 32 starts that season.

Volquez struggled badly with the Padres in 2013. While his record of 9-10 in 27 starts was respectable, his 6.01 ERA was terrible given the context, and he was given his unconditional release in late August. Opponents were hitting .291 with power against him, and his strikeout rate was the lowest of his career, bad signs for a pitcher who needs to overpower hitters to compensate for issuing many more walks than the average pitcher. On December 13th, however, the Pittsburgh Pirates signed him to a one-year contract and added him to their 40-man roster, confident that they could turn him around as they had done in previous seasons with A.J. Burnett and Francisco Liriano, two other power pitchers with control issues who found renewed success in a Bucs uniform. And turn him around they did! He ended up as the Pirates' ace, going 13-7 with a 3.04 ERA in 32 games in 2014. He logged 192 2/3 innings, giving up 166 hits and striking out 140. He was selected to start the National League Wild Card Game at home, facing the San Francisco Giants on October 1st, but after starting the game with four scoreless innings, he loaded the bases with none out in the 5th and gave up a grand slam to SS Brandon Crawford as the Pirates went on to lose, 8-0.

Following his successful comeback season, Volquez became a free agent and on December 17th, he signed a two-year deal with the Kansas City Royals for $20 million, a deal which was only finalized on December 29th. he was the team's most reliable starting pitcher during the regular season, in effect replacing the departed James Shields, who had left via agency. He went 13-9, 355 in 34 games, pitching 200 1/3 innings - the highest total of his career - and striking out 155. The Royals won their first Championship in three decades that year, and Edinson was right at the center of the action. He started five games during the run, and while he was only credited with one win, it was a key one, a 5-0 blanking of the Toronto Blue Jays in Game 1 of the ALCS on October 16th, stopping the Blue Jays' momentum when they came into the series completely pumped up after coming back from two games down to eliminate the Texas Rangers in the Division Series. The Royals won both of his World Series starts against the New York Mets, in Game 1 and Game 5, even though he ended up with a no-decision in both games. He gave up only 4 runs in 12 innings over those two starts, both times putting his teammates in a good position to make a late-game comeback, winning both times in extra innings. Those World Series starts were particularly poignant as his father suffered a fatal heart attack on October 27th, when Game 1 was played.

In 2016, Volquez had a poor season for the Royals, seeing his ERA rise to 5.37 as his record fell to 10-11 in 34 starts and 189 1/3 innings. He allowed a lot of baserunners, with 217 hits and 76 walks, resulting in an American League-leading 113 earned runs allowed. He had one particularly awful outing on June 24th against the Houston Astros when he was charged with 12 runs (11 earned) in only one inning of work. He gave up 9 runs in the 1st inning, then came back to pitch the 2nd and allowed the first three batters to reach before being relieved by Dillon Gee, who allowed all three inherited runners to score. The Royals lost the game, 13-4. He became a free agent again after the season, and in spite of his poor result, landed a nice contract, signing with the Miami Marlins for two years and $22 million on November 28th.

On January 16, 2017, tragedy struck Edinson's immediate family as his younger brother, Brandy, was stabbed to death in a Santo Domingo barbershop. On May 2nd, he had a highly unusual start against the Tampa Bay Rays as he struck out 9 batters but also allowed 8 walks in 4 1/3 innings before leaving because of a blister on his thumb. The Elias Sports Bureau stated that he was the first starting pitcher since 1900 to strike out and walk that many batters in less than five innings. On one of the few balls the Rays managed to put in play, Logan Morrison hit a home run and it was enough to saddle him with a 3-1 loss. On May 24th, he lost a start 4-1 to the Oakland Athletics to fall to 0-7 on the year; he tied a Marlins franchise record for most consecutive losses to open a season. However, he began to turn things around after that, winning his next start before on June 3rd, he pitched the first no-hitter of the season when he defeated the Arizona Diamondbacks, 3-0. He gave up two walks, but both baserunners were erased on double plays, meaning he faced only the minimum 27 batters. He almost left the game after the first batter, when he collided with Rey Fuentes at first base and turned his ankle, but he stayed in the game and pitched a masterpiece instead, needing only 98 pitches. After the game, he dedicated his performance to two close friends who had died over the past few months, Jose Fernandez and Yordano Ventura. He followed his no-hitter with another strong performance: on June 8th, he pitched 7 scoreless innings in a 7-1 win over the Pittsburgh Pirates. However, his season ended with an appearance on July 5th during which he was bothered by tendinitis in his left knee. He was placed on the disabled list immediately afterwards, and was going to miss the rest of te season in any case when the Marlins announced that he also needed to undergo Tommy John surgery, pushing back his return to the second half of the following season. He was 4-8, 4.19 in 17 starts for Miami and was released after the season as the Marlins went on a cost-cutting spree.

He returned to the majors in 2019, making a couple of starts for the Texas Rangers early in the season before returning to the injured list with elbow issues. He had no decisions and a 7.04 ERA in 7 2/3 innings in his two games. He was back in September to make 9 more outings, finishing the year at 0-1, 6.75 in 16 innings.