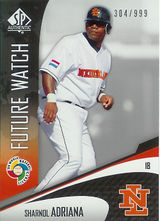 Sharnol Adriana is a two-time Olympian who was a Mexican League star early in the 21st Century.

Up and down the Blue Jays ladder[edit]

In the 1995-1996 Australian Baseball League, Adriana hit .341 to help the Sydney Blues to the title. He was named the second-team All-Star third baseman behind Perth's Jason Hewitt.

Getting back in the swing of things in Newark[edit]

Adriana moved to the Newark Bears and shined for the independent team. He hit .334/?/.518 and was second in the Atlantic League in average to Angel Espada. He hit 16 homers and drove in 77, second on a team with several ex-major leaguers. He made the league All-Star team as a utility man.

In 2002, he reversed course during year, returning to Cordoba from Campeche and hitting .317 and slugging .520. During the 2002 Intercontinental Cup, Adriana hit .350/.435/.350. He batted .301/?/.488 for Cordoba in the '03 season. He had the best average in the 2003 European Championship, hitting .500/~.613/.583 for the champion Dutch squad. He scored 9 runs in 8 games and his 7 walks were two behind leader Claudio Liverziani. Adriana hit .391/.407/1.043 in the 2003 Baseball World Cup with 10 RBI, 6 runs, 3 doubles and four homers in six games. He became the third player in Cup history to hit three homers in a game, following Antonio Muñoz (1980 and Luis Casanova (1990). Adriana had his three-homer game against France. He was named the Cup All-Star first baseman (beating out Yasuyuki Saigo, Olmedo Saenz, Tae-kyun Kim and Kendry Morales) and tied for third in homers, one behind Takashi Yoshiura and Audes de Leon.

He continued to pummel the ball in 2004, hitting .297/~.422/.480 with 7 HR for the Yucatan Lions and Monclova Steelers. He again appeared for the Dutch Olympic squad that year.

Playing for the Netherlands in the 2006 World Baseball Classic, Adriana went 2 for 6 with a double. In the 2006 Intercontinental Cup, he hit .405/.511/.568 with 10 RBI in nine games. He was third behind Yoandry Urgellés and Young-seop Bae in RBI and made the all-tournament team at first base.

In 2007, Adriana batted .351/.442/.499 and stole 22 but was caught 15 times. He played for the Dutch team that won the Gold Medal in the 2007 European Championship and made the All-Star team at DH. In the competition, Adriana batted .400/.568/.640 with 10 runs and 11 RBI in 8 games. Adriana hit .316/.386/.447 with 7 runs and 7 RBI in 10 games as the Dutch team DH in the 2007 Baseball World Cup. Adriana came up big against the South Korean national team with a home run on his 37th birthday to help the Dutch club stay alive, then he singled home Raily Legito with the winner in a stunning upset of the Cuban national team. Adriana and Legito had played in the only prior game in which the Netherlands beat Cuba, in the 2000 Olympics.

Despite not playing in the Korea Baseball Organization, Adriana almost won the Home Run Derby prior to the 2008 KBO All-Star Game. 3 members of the Dutch Olympic team and players from the Cuban Olympic squad competed against the KBO All-Stars. Adriana hit 7 home runs in the scheduled final round, 6 more than Ariel Pestano and as many as Jae-hong Park; this forces another round, in which Park outhomered Adriana.

As the captain of the Dutch squad in the 2008 Olympics, the first baseman hit .217/.250/.391 with only two runs and one RBI in 7 games; he still wound up with the third-best OPS on a poor-hitting team. He hit a solo homer against Weiliang Li in the Netherlands' win over host China and got their lone hit in a loss to Stephen Strasburg and the US.

Adriana hit .328/.419/.523 with 17 homers and 83 runs in 110 games for the Veracruz Eagle. After the Mexican League season ended, he joined DOOR Neptunus for his debut in Hoofdklasse; at the time, Neptunus was second in the league and fighting for its first title in 3 years. Adriana's first game in Hoofdklasse came on August 31 as the cleanup hitter and DH in Neptunus's 14-4 win over rival Kinheim. He was 1 for 3 with a walk, 2 times hit by pitch, run and RBI.

Adriana went 4 for 16 in the 2009 World Baseball Classic, serving as the main Dutch DH. He got a key hit in their 3-2 win over the Dominican national team; facing Edinson Volquez, he singled home Sharlon Schoop with the second Dutch run and an error by Hanley Ramirez on the play scored a third.

Adriana joined the 2015 Rojos del Águila de Veracruz as a hitting coach before ascending to the manager's position on May 28th. He also coached in winter ball after that season, starting as the hitting coach for Tobis de Acuyucan before moving to the Yaquis de Obregón in the same role on December 18, 2015. This was his last season coaching in Mexico.

He became a coach with the Frisco Rough Riders in 2016 and Hickory Crawdads in 2017. He returned to managing with the DSL Rangers 1 in 2018. He worked as a coach with one of the DSL Rangers teams in 2019. In 2020 Adriana was scheduled to be the hitting coach for the Spokane Indians before COVID-19 forced the cancellation of the minor league season. He was a hitting coach for the ACL Rangers in 2021.