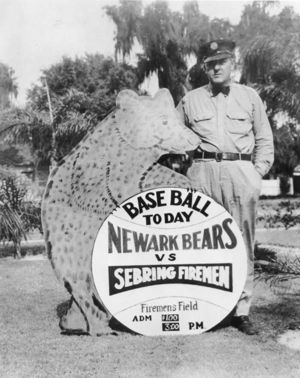 In 1917 the Newark Indians were renamed the Newark Bears. Except for a lack of a team in '20, the Bears remained a fixture in the International League until 1950. That season the team moved to Springfield, MA and became the Springfield Cubs; the culprit likely was the introduction of television, which allowed New Jersey residents to tune in to games by the New York Yankees, Brooklyn Dodgers and New York Giants. Never winning a title through 1931, the team's fortunes changed when the club was purchased in November 1931 by Jacob Ruppert and became the main farm club of the Yankees. They finished in first place their first year as a Yankee property, then repeated in 1933, 1934, 1937 and 1938 for five such finishes in 7 years before the Yanks moved their top players to the Kansas City Blues in the American Association, leaving Newark for the 2nd-tier prospects (still good enough to keep them competitive). The Bears finished first also in 1942. The 1937 team is considered one of the greatest minor league clubs ever.

Four Bears clubs are considered among the greatest minor league teams of all time:

From 1998 to 2013, a team called the Newark Bears played in independent leagues, first the Atlantic League from 1998 to 2010, and the Can-Am Association starting in 2011. Beginning in 1999, the club played at Bears and Eagles Riverfront Stadium. In 2002, under the leadership of skipper Marv Foley, they captured the league championship. They captured a second league title in 2007. Some of the former big leaguers to play for the Atlantic League Bears include Jose Canseco, his brother Ozzie, Rickey Henderson, Jim Leyritz, Jaime Navarro, Lance Johnson, and Jose Lima.

In their latter years home attendance plummetted and the Newark Bears played their final season in 2011.