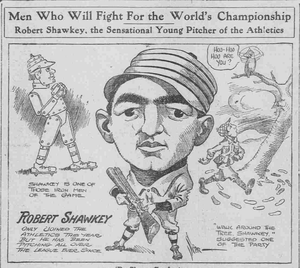 Cartoon from 1913 when he was new with the team.

Shawkey began his pro career with the Harrisburg Senators of the Tri-State League in 1911 and reached the majors two years later when he joined the Philadelphia Athletics' rotation. He went 16-8 with 18 complete games and 5 shutouts in 1914 as the A's reached the World Series. However, he gave up three runs (two earned) in five innings in Game Four of the Fall Classic, as Philadelphia was swept by the Boston Braves. The following summer, Athletics owner/manager Connie Mack sold off many of his key players, and Shawkey was sent to the New York Yankees on June 28th.

In 1916, his first full season in New York, Shawkey won 24 games, posted a 2.21 ERA, and notched an American League best 8 saves. His performance declined the next year, and he missed most of the 1918 season serving in the Navy during World War I. After returning from the war, he had two straight 20 win seasons, and he paced the AL with a 2.45 ERA in 1920. He slipped to 18 wins and a 4.08 ERA in 1921 as the Yankees reached the World Series (falling to the New York Giants). Then, the next summer, he again recorded 20 wins as New York repeated as AL champs (and again lost to the Giants in the Series).

Shawkey made history early in the 1923 season, starting the first game at new Yankee Stadium. After winning 16 games during the season, he recorded a victory in Game Four of that year's World Series as the Yankees finally defeated the Giants for the crown. Over the next four years, his numbers fell off, however, and he suffered an injured foot, causing him to miss a portion of the 1926 campaign. He went on to appear in 19 games for the 1927 Yankees but did not appear in the World Series that season.

After pitching for the Montreal Royals in the International League in 1928, Shawkey joined the Yankees staff as pitching coach in 1929. Following the death of New York manager Miller Huggins, he became skipper of the club, spending one season at the helm and leading the team to a third place finish in 1931. He would go on to manage in the minors for several years with the Jersey City Skeeters in 1931, the Scranton Miners in 1932 and 1933, and the Newark Bears in 1934 and 1935. After scouting for the Pittsburgh Pirates and the Detroit Tigers in the 1940s, he returned to managing, leading the Tallahassee Pirates during part of 1949 and the Jamestown Falcons in 1950. He was then coach at Dartmouth College from 1952 to 1956.

In 1976, Shawkey threw out the ceremonial first pitch at newly-renovated Yankee Stadium. He died at age 90 following a long illness.