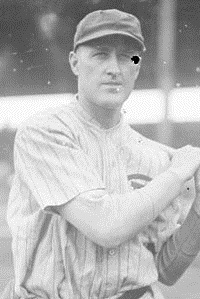 "He was the shortstop on the 1916 (Giants) team who won twenty-six consecutive games and in 1917 and 1918 was the best-fielding shortstop in the National League." - Fletcher's New York Times obituary

Art Fletcher played 13 years in the majors, mostly for the New York Giants, and appeared in four World Series with the club. He was a defensive stalwart for more than a decade and had a decent bat for a shortstop. He later was a big league manager and longtime coach.

Fletcher began his playing career with the Dallas Giants in 1908, hitting .273, and was discovered by New York manager John McGraw when Dallas played an exhibition game against New York. He joined New York in 1909 and was a starter for the club in the 1911 World Series. He again played in the Fall Classic with the Giants in 1912, 1913 and 1918 but hit just .191 in 25 postseason games as New York lost all four World Series in which he participated. While with the Giants, he also led the National League in hit-by-pitch five times.

During the 1920 season, Fletcher was traded to the Philadelphia Phillies along with Bill Hubbell for shortstop Dave Bancroft. He hit .296 in his first year in Philadelphia but missed the entire following season due to several deaths in his family. He came back to the Phillies in 1922 and hit .280 with a career-best 7 home runs in what would be his final year as a player.

After his playing career ended, Fletcher became the Phillies' manager in 1923. In each of his four years at the helm of the team, Philadelphia finished well below .500, with a best finish of sixth place in the NL. He joined the New York Yankees coaching staff under Miller Huggins in 1927 and found more success there. He participated in ten World Series as a New York coach, with the Yankees winning nine of them. He specialized in stealing signs and became the highest-paid coach in baseball, reportedly earning more than $10,000 a year. He also was interim skipper of the team for 11 games in 1929 following Huggins' death. He remained a member of the Yankees staff until suffering a heart attack late in the 1945 season.

"Fletcher could have been the manager of the Yankees after the death of Huggins. Managerial posts with other clubs were offered him from time to time, but he preferred to remain a coach. Apparently, his experience with the Phillies had cured him. He never again wanted the responsibility and headaches that accompany a manager's job." - Fletcher's New York Times obituary