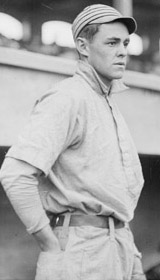 "A stone wall in defense, an irresistible force in offensive play, it is a matchless machine, in all human probability the finest that has ever been gathered together." - from an article in Sporting Life, July 1913, called The Greatest Infield in the History of Baseball, about the '$100,000 infield' of which McInnis was a part

Stuffy McInnis was a major star during the time of Ty Cobb. Stuffy's career ran from 1909 to 1927, and he also managed in 1927. After his career, he coached at Harvard University.

Supposedly, he got his nickname because his play as a youth yielded spectator comments of "that's the stuff".

McInnis, who broke in as a shortstop, was soon moved to first base, an important defensive position in the era. He showed good range and made few errors. In 1921, he made only 1 error all season, for a .999 fielding percentage. He set a record for most total chances without an error (over 1,300).

McInnis appeared in five World Series, with his teams winning 4 of the 5. In 1911, 1913, and 1914, he was part of the famous "$100,000 infield" with Home Run Baker, Eddie Collins, and Jack Barry. In 1918, he was part of the Boston Red Sox World Series team, with Babe Ruth and Carl Mays pitching so effectively to win the Series. In 1925, he was with the Pittsburgh Pirates who beat Walter Johnson's Washington Senators.

Based on the similarity scores method, the most similar players to McInnis are Charlie Grimm and Hal Chase. Hall of Famer Lloyd Waner is also on the list, although Waner played in a lively ball era while McInnis spent most of his career in the run-scarce dead-ball era.