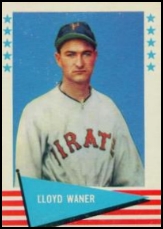 Inducted into Hall of Fame in 1967

"He is a better player than me and can spot me 25 feet and then beat me in a sprint. A batter's got to knock a fly over the fence to keep him from reaching it, and he doesn't miss 'em either." — Paul Waner

Outfielder Lloyd Waner got 2,459 hits in eighteen seasons in the majors and, along with his brother Paul Waner, is a member of the Hall of Fame. They hold the record for the most hits by a set of brothers in Major League Baseball at 5,611 hits. Paul had 3,152 hits in his Hall of Fame career. Only the Alou (5,094) and the DiMaggio (4,853) brothers were within striking distance of that record; in both of those cases there were three brothers who played in the Major Leagues.

Waner began his pro career as a teammate of his brother's on the San Francisco Seals in 1925, hitting .250 in 31 games. After 6 games with the Seals the next year, he asked for his release and was subsequently signed by the Pittsburgh Pirates. He reached the majors with the Pirates in 1927, joining his brother in the club's outfield, and hit .355 (it was the only time in his major league career that he would be in the top five in the league in batting average). He led the National League with 133 runs scored and was sixth in MVP voting (as Paul won the award). In that year's World Series, he hit .400 against the immortal 1927 New York Yankees.

In 1928, Waner hit .335 and finished fifth in MVP voting. He paced the NL with 20 triples in 1929 and led the circuit with 214 hits two years later, in 1931. During his career, he also was the league leader in singles four times (although that is not a traditional hitting category).

During his career, Waner was known for his good eye at the plate. He led the league five times in most at-bats per strikeout, and only twice in the majors did he strike out more than 15 times in a season. In 1933, he fanned just 8 times in 500 at bats, and in 1941 he set a still-standing major league record by recording 219 at bats without a single strikeout. He was also considered an excellent defensive centerfielder. He holds the record for the fastest 2,000 hits in National League history; he reached the mark in 1,453 games. His brother Paul ranks third in that category, reaching the mark in 1,468 games.

When Paul and Lloyd homered back-to-back for Pittsburgh on September 15, 1938 game, it marked the last time two brothers went deep in the same outing for the Bucs until 2009, when Adam LaRoche and Andy LaRoche accomplished the feat. It was also the only time in major league history that brothers had homered back-to-back, until B.J. and Justin Upton did so for the Atlanta Braves on April 23, 2013.

After retiring, Waner scouted for the Pirates through 1949. In August of 1949, when Bruno Haas was suspended by the Northern League for the remainder of the season, Waner filled in as manager of the Fargo-Moorhead Twins, a Pirate farm club.

Waner was elected to the Hall of Fame by the Veterans Committee in 1967. His highest vote count in BBWAA voting had been in 1962, when he got 23% of the vote, less than Mel Harder, Johnny Vander Meer, or Marty Marion, but more than Phil Rizzuto, George Kell, or several other players who eventually got into the Hall. His election has not been a popular one among sabermetricians, since he has few of the typical indicia of a typical Hall of Famer except for his .316 batting average which was, however, earned in a lively ball era. His selection probably rests on the fact that he and his brother Paul, whose election has not been controversial, were linked in the minds of many fans. They played in the same outfield for 14 years, and had the nicknames "Big Poison" (for Paul) and "Little Poison" (for Lloyd).