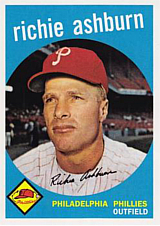 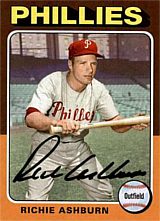 A truly beloved figure in Philadelphia, Richie Ashburn was a Hall of Fame centerfielder, broadcaster, and sportswriter. During the 1950's, he had more hits than any other major leaguer. [1]

Ashburn was from Tilden, Nebraska, where his father owned the largest general store in town. Richie played baseball in high school and for the American Legion. He represented Nebraska in the Esquire All-Star game in New York, NY in 1944, attracting the attention of baseball scouts. Signed by Philadelphia Phillies scout Eddie Krajnik, he was assigned to the Utica Blue Sox in the Class A Eastern League for the 1945 season. Originally a catcher, he switched to the outfield during that season. In August, he left the team to go into the Army and spent about a year in Alaska in the Quartermaster Department, missing the 1946 season. While in Alaska, he played in about 15 baseball games. He returned to Utica for the 1947 season, hitting .362 and leading the league in runs and hits.

Ashburn, who played 15 years in the majors, spent his first 12 seasons with Philadelphia, making his first baseball card appearance in the 1949 Bowman set. He broke in at age 21 in 1948 and immediately showed the abilities that marked his career: he hit .333, had a .410 OBP, and stole 32 bases in 117 games. Although Ashburn was probably a better player, Alvin Dark won the Rookie of the Year Award in its second year of existence. Richie went on to hit over .300 ten times in his career, with highs of .350, .344, and .338 and winning a pair of batting titles. He was excellent at drawing a walk, leading the league 4 times in OBP at a time when few people noticed. His personal best walk total was 125 in 1954. As an older player, he was still a major contributor to the Chicago Cubs in 1960-1961 and to the New York Mets (as an original Met) in 1962. With the Cubs in 1960, he scored 99 runs in front of Ernie Banks' 41 home runs. With the Mets in 1962, although the team was a laughingstock, Ashburn hit .306 with a .424 OBP. 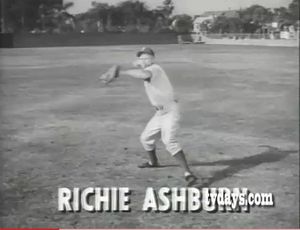 When his career was over, there was little talk of the Hall of Fame for him. In his first year of eligibility, he got just 2% of the vote. After 6 years of eligibility, he was pulling under 10% of the vote. He did get as high as 41% in 1978. What made the difference, eventually, when he was let in by the Veterans Committee, was the growing understanding that his fielding prowess was truly special. His range factors as a center fielder are unreal, and outstrip those of Willie Mays, who had been considered the top fielder of the time. Add to that the growing affection of fans who loved Richie's broadcasting, and his popularity as a potential Hall of Famer grew and grew. Although similarity scores show only two other Hall of Famers among the 10 players most similar to him (Lloyd Waner and Harry Hooper), there has been no controversy about his selection. He had over 2,500 hits in his career, was a lifetime .308 hitter with a high OBP, and went out on top with a .306 average in his last year. That, combined with the incredible fielding and broadcasting, was enough. He was rewarded with Hall of Fame induction in 1995.

After his playing career, Ashburn was hired by the Philadelphia Phillies as an analyst in 1963. Originally, Ashburn worked with Bill Campbell and Ford Frick Award winner Byrum Saam. When Campbell left the Phillies in 1970, he was replaced by Harry Kalas. Kalas and Ashburn would work together on Phillies broadcasts for twenty-seven years. His rapport with Kalas was both legendary and genuine, Kalas referred to him as "His Whiteness." He would lament the mistakes of the Phillies with an "Oh brother." Photographs of an aging Ashburn showed him with a jeff cap and a pipe. Additionally, Ashburn was a boyhood friend of comedian Johnny Carson and became known for his homespun stories of his boyhood in Nebraska.

On September 9, 1997, at 5 AM, Ashburn was awoken by chest pain in his hotel room in New York City. He had called the Phillies-Mets game at Shea Stadium the night before. By the time paramedics and the Phillies team trainer reached his room, Ashburn was dead of a heart attack at 70. At his viewing, the crowd was estimated at 40,000 Phillies fans. Harry Kalas wrote a moving poem for the occasion. Ashburn was replaced by Larry Andersen for the 1998 season.