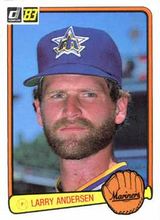 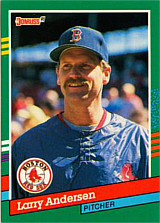 Journeyman reliever Larry Andersen pitched for six teams over 17 seasons, but is most notable for being part of one of the biggest trades in Houston Astros history. On August 30, 1990, he was traded by the Astros to the Boston Red Sox for first baseman Jeff Bagwell. Andersen had a 1.23 ERA for the Sox that season, helping the team to a division title. However, the Astros ultimately got the better of the deal as Bagwell became a Houston mainstay at first base, hitting over 400 home runs in his career. It is a trade that many Red Sox fans believe typify the Lou Gorman and Jean Yawkey era when the Red Sox were desperately trying to win a title for the Yawkey ownership group.

Andersen holds the record for most innings pitched in a season without a decision, 79 2/3, with the Seattle Mariners in 1982. That season, he was also the mastermind of the Mr. Jell-O caper. With M's manager Marcel Lachemann out on the town in Chicago during a series with the White Sox, Larry and teammates Joe Simpson and Richie Zisk got a key to his suite and stashed all of the room's contents in the bathroom, along with a toilet full of lime Jell-O. Lachemann spent the rest of the season trying to find the culprit in a fruitless pursuit. He did, however, discover Jell-O boxes in his room on a regular basis.

After retiring, Larry was a minor league pitching coach in the Philadelphia Phillies organization. He coached for the Reading Phillies in 1995-1996 and Scranton/Wilkes-Barre Red Barons in 1997. He currently works as a radio broadcaster for the Philadelphia Phillies with Scott Franzke. He has entertained Phillies' fans with his "Shallow Thoughts" segments, which consist of quotes such as: