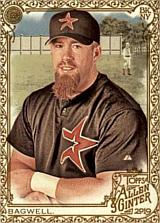 "Congratulations, Jeff, on your number being retired. I begged the Red Sox not to trade you when you were in the minors with us. Boston's loss was Houston's gain. See you in Cooperstown." - Carl Yastrzemski, 2007 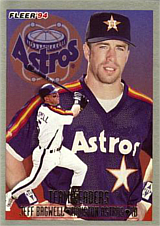 Hall of Fame first baseman Jeff Bagwell played fifteen seasons with the Houston Astros and, along with Craig Biggio, was the face of the club for many years.

Bagwell grew up in Boston idolizing Hall of Famer Carl Yastrzemski. Selected by the Red Sox in the fourth round of the 1989 amateur draft, he was named the Double A Eastern League's MVP in 1990, his first full season of professional baseball. He led the league with 160 hits and 220 total bases, tying for the lead with Mike Twardoski with 24 doubles and finishing second to Luis Mercedes (.334) with a .333 batting average. He seemed well on his way to following in Yaz's footsteps to Fenway. But a little over a year after signing with the BoSox, Bagwell became part of one of the most lopsided trades in baseball history. On August 30, 1990, he was traded to the Houston Astros for journeyman relief pitcher Larry Andersen. Andersen had a 1.23 ERA for the Sox that season, helping the team to a division title. The Astros ultimately got the better of the deal.

Originally a third baseman, Bagwell was moved to first by Astros manager Art Howe because Ken Caminiti was the team's regular at third. Caminiti went on to become one of Bagwell's closest friends. Jeff made his big league debut for on Opening Day 1991. He hit .294 with 15 home runs and 82 RBI that season and was named the National League Rookie of the Year. Three years later, in 1994, he had his best season, when he hit .368 with 39 homers and 116 RBI. He only played in 110 games as his year was cut short because of a season-ending wrist injury right before the start of the 1994 players strike; had the strike not occurred, he would likely not have been in consideration for the MVP Award, but as things stood, he had not missed any significant playing time yet and was voted the award. Coincidentally, his American League MVP counterpart was Frank Thomas, who was also born on May 27, 1968. In 1999, Bagwell became one of only two players who have ever had a season with 30 stolen bases, 120 walks, and 140 runs scored; Lenny Dykstra did it in 1993.

Later in his career, Bagwell was slowed by a shoulder injury. While his batting average dropped, he did not miss significant playing time because of the ailment until 2005, when he was out most of the season. He returned when the Astros finally reached the World Series. He saw limited playing time in the postseason and made his last career appearance in Game 4, grounding out as a pinch hitter in the seventh inning. Because of his recurring injury, Bagwell missed the entire 2006 season and retired at the end of the year. On the same day that Bagwell formally retired, the Astros settled a lawsuit with an insurance company over a claim that the Astros were due over $15 million for disability connected with Bagwell's shoulder. He wrapped his career as the Astros all-time home run leader.

Bagwell is famous as the test case for the Bill James style of baseball analysis. When Bagwell came up, James predicted he would be a star. That prediction (and more importantly, the basis on which it was made) was hotly contested by an established sportswriter of the old school. As we have seen, James turned out to be right.

His number 5 was retired by Houston in a ceremony on August 26, 2007, and he was in the inaugural class for the Houston Astros Hall of Fame in 2019. At the All-Star break in 2010, he was named the Astros' hitting coach, replacing Sean Berry. Houston had some of the worst hitting statistics in the majors at the time. He was the top vote getter among newcomers on the ballot in the 2011 Hall of Fame Election, getting 41.7% of the vote and finishing 6th. Such a strong start is traditionally a sign of eventual election, although he faced tough competition in future years. In 2012, his vote total jumped to 56.0%, a significant gain that confirmed his strength as a candidate for election. He continued to move up in 2013, to 59.6% but dropped to 54.3% in 2014, along with others who had received between 50 and 65% in previous elections, the result of a particularly strong ballot. There was another strong ballot in 2015, which saw him finish in 6th place, at 55.7%. He moved up significantly in 2016, receiving 71.6% of the vote, less than 4% away from the required total, making his future election almost certain. Indeed, in the next round of voting, in 2017, he was elected with 86.2% of the vote, joining Tim Raines and Ivan Rodriguez in that year's class of players elected by the BBWAA.