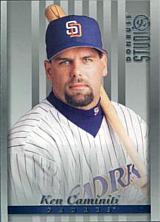 Selected by the Houston Astros in the third round of the 1984 amateur draft, Caminiti was signed by scouts Bill Hallauer and Paul Weaver. He made his pro debut with the Osceola Astros in 1985, hitting .284, and then spent the next two years with the Columbus Astros, hitting at least .300 both seasons. He was called up to the majors in July 1987 and made his debut July 16th, going 2-for-3 with a home run and a triple against the Philadelphia Phillies. Overall, in 63 games with Houston that year, he hit .246 with 3 homers. He spent most of 1988 with the Tucson Toros but also made 30 appearances for Houston. Caminiti became the Astros' regular third baseman in 1989, hitting .255 with 10 home runs. He put up consistent numbers over the next five years with Houston and appeared in the All-Star Game in 1994.

Following the 1994 season, Ken was dealt to the San Diego Padres as part of a 12-player trade. He hit .302 with 26 home runs in his first season in San Diego. The following year, he had one of the greatest seasons ever by a third baseman. He hit .326/.408/.621 with 40 homers, 109 runs scored and 130 RBI in 1996 while leading the Friars to a division title, en route to an MVP Award. His totals dipped back down the following season, with a .290/.389/.508 line, 26 homers and 90 RBI 1997. Caminiti hit .252 with 29 homers in 1998 as the Padres reached the World Series, losing to the New York Yankees. Following the season, he became a free agent and returned to Houston. Injuries limited his playing time with the Astros over the next two years, and he moved on to the Texas Rangers in 2001. Released by Texas after hitting .232 in 54 games, he signed with the Atlanta Braves, ending his big league career that fall.

Caminiti was troubled by drugs and alcohol during his career. He went through an alcohol rehab program in 2000 and was arrested for cocaine possession in 2001. He was sentenced to probation on the possession charge but subsequently violated the terms of his probation on at least four occasions. In 2002, he admitted to Sports Illustrated that he had used steroids during his MVP season, as well as several other seasons, to enhance his performance. Five days following his fourth probation violation, for which he was given credit for time served on a 180 day jail sentence and released, he passed away at 41 from a speedball (cocaine and heroin) overdose.

In 2016, Caminiti was posthumously inducted into the San Diego Padres Hall of Fame.