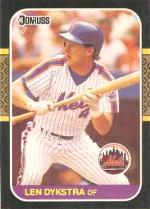 Nicknamed "Nails", scrappy centerfielder Lenny Dykstra was a popular star during his twelve years in the major leagues, split between the New York Mets and Philadelphia Phillies. He was a multi-talented player who tended to hit around .300, draw lots of walks, hit for moderate power (more often doubles than homers), steal bases, and field his position well. He was a three-time All-Star who performed extremely well in two World Series.

Selected by the Mets in the 13th round of the 1981 Amateur Draft, Dykstra was signed by scout Myron Pines. With the Lynchburg Mets in 1983, he hit .358, scored 132 runs, and stole 105 bases to be named the Carolina League MVP. Reaching the majors in 1985, he split playing time in center with Mookie Wilson as a rookie. The Mets won the NL East the following summer, 1986, and he was one of the club's biggest postseason stars. In the NLCS against the Houston Astros, he hit .304 with a game-winning homer in Game 3 and a single to drive in the Series-clinching run in Game 6. He slugged .519 and hit a pair of home runs in the World Series as New York beat the Boston Red Sox in 7 games.

Midway through the 1989 season, Dykstra was traded to the Phillies in the deal that brought Juan Samuel to New York. In 1990, his first full year in Philadelphia, he hit .325, tied for the National League lead with 192 hits, paced the circuit with a .418 on-base percentage, and made the All-Star team. After a series of injuries slowed him for the next two seasons, including being involved in an after-hours car crash with teammate Darren Daulton that ended both players' season in 1991, he bounced back in 1993 with his finest season. He hit .305 and led the NL in hits (194) and runs scored (143) while finishing second to Barry Bonds in MVP voting. That year, he became the first player ever to have a season with 30 stolen bases, 120 walks, and 140 runs scored, a feat which Jeff Bagwell duplicated in 1999. The Phillies won the pennant, and he went on to hit .348 with 4 home runs and a .913 slugging percentage in the 1993 World Series as his club fell to the Toronto Blue Jays. However, struggling with injuries, he never played in over 100 games again. His career ended in 1996 at only age 33.

Since his playing days, Dykstra has engaged in a variety of business interests. He owned a number of car washes and Quick Lubes as well as other businesses and wrote a stock-picking column in an online financial magazine. His bankruptcy (Chapter 11) in 2009 was highly publicized. He was accused of steroid use in a lawsuit in 2005 but has denied using, and his name was mentioned in the Mitchell Report in 2007. On April 15, 2011, he was arrested in Encino, CA on "suspicion of trying to buy a stolen car". The arrest came one day after he had been charged with embezzling from his bankruptcy estate, that is selling various items in his possession without the approval of the bankruptcy trustee. When police searched his home, they found cocaine, ecstasy and a synthetic growth hormone, adding to his woes. He had been serving jail time since June 2011, for charges related to the car theft and drug possession, then was additionally charged in August with indecent exposure. Those charges stemmed from ads Dykstra placed on the website "Craigslist" seeking a housekeeper or personal assistant; he had allegedly exposed himself to six women who had responded to the ads between April of 2009 and early 2011. On March 5, 2012, he was sentenced to three years in a California state prison after pleading no-contest to charges of grand theft auto and providing false financial information, as part of an elaborate fraud scheme involving the leasing of luxury automobiles. On April 18th, he was handed a nine-month jail sentence and three years' probation as a result of the lewd conduct charges, then on July 13th, formally pleaded guilty to charges of bankruptcy fraud, concealment of assets and money laundering, with a much longer jail sentence likely to result. Prosecutors requested a 2 1/2 year prison sentence for that offense, but the judge, Dean Pregerson, came down with a sentence of 6 1/2 months, along with 500 hours of community service and a fine of $200,000.

Seemingly unable to keep his name off the police blotter, on May 23, 2018, Dykstra was arrested again, this time in Linden, NJ for threatening a driver for the car hire service Uber and also on a variety of drug charges as police found the substances on his person when they arrested him. He claimed in return that the driver had tried to kidnap him; for his part the driver said Dykstra had threatened to kill him ("I'll blow your (expletive) head off") and that he was in fear for his life. The police report added that Dykstra appeared to be under the influence of intoxicants when he was arrested. On October 10th, he was indicted by a grand jury on charges of possession of cocaine and metamphetamine and on one count of making a terrorist threat. This came after he had rejected an offer for a plea bargain. In April 2019, he sued former teammate Ron Darling, as well as Darling's publishers, because the former pitcher had accused him in his autobiography at having directed racist insults at Dennis "Oil Can" Boyd during the 1986 World Series. On May 29, 2020, Justice Robert D. Kalish of the New York Supreme Court dismissed the lawsuit, refusing to rule on the facts by stating: "It is only to say that Dykstra’s reputation for unsportsmanlike conduct and bigotry is already so tarnished that it cannot be further injured by the reference." He added that: "Based on the papers submitted on this motion, prior to the publication of the book, Dykstra was infamous for being, among other things, racist, misogynist, and anti-gay, as well as a sexual predator, a drug-abuser, a thief, and an embezzler."

Dykstra is the father of Cutter Dykstra, minor league baseball player, and Luke Dykstra, who was selected in the 7th round of the 2014 amateur draft.