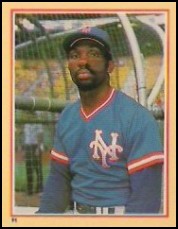 Mookie Wilson was a popular player who had 12 seasons in the major leagues, mostly with the New York Mets. Fans loved his unusual nickname, and used to yell "Moooooooo-kie". He had 327 stolen bases in the majors and played on the world champion 1986 New York Mets. He played for three other Division winners: the 1988 New York Mets and the 1989 and 1991 Toronto Blue Jays. According to the similarity scores method, the most similar player is his contemporary Terry Puhl.

Wilson was signed as a 2nd round pick in the 1977 amateur draft by the New York Mets and scout Wayne Britton.

It may be apocryphal, but it is believed Mookie gained his nickname for his inability to say "milk" when he was a child.

Mookie Wilson played high school baseball at Bamberg Ehrhardt High School in his hometown of Bamberg, SC for Coach David Horton. Mookie says his experience under Coach Horton is what made it possible to make the pros.