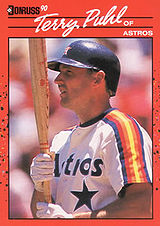 Terry Puhl played in Organized Baseball from 1974 to 1991. He spent 15 years in the major leagues, all but one year with the Houston Astros. Puhl hit .280/.349/.388 in the majors and retired as the lifetime leader in outfielder fielding percentage (.993). He was a one-time All-Star selection in 1978, when he was leading the National League in hitting at the All-Star break and was the Astros' lone representative at the Mid-summer Classic. He is among the top 10 in several categories on the Astros all-time leaderboard.

Terry Puhl held the record for most games played by a Canadian Major Leaguer with 1,531 until he was passed by Larry Walker in the first days of the 2002 season. Puhl was the last Saskatchewan native in the major leagues until 2013, when Andrew Albers debuted. Terry's son Stephen Puhl played in the minors for three years.

Puhl managed Team Canada in the 2007 Baseball World Cup. They went 4-3 and missed the quarterfinals, being the only team with a winning record that did not make the cut. Puhl also managed Canada in the 2008 Final Olympic Qualification Tournament. They finished first and won a spot in the 2008 Olympics. He guided Canada to 6th place in Beijing at 2-5; all five losses were by a single run as Canada suffered tough luck.

Puhl is currently the head coach at University of Houston-Victoria