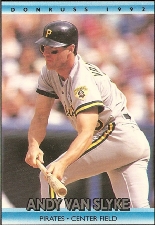 Andy Van Slyke played 13 seasons in the big leagues, hitting 164 home runs. He led the league once in hits, once in doubles and once in triples, finishing as high as fourth in the MVP voting in 1988. He won five Gold Gloves and was named to three All-Star teams.

Two of the most similar players (based on similarity scores) are his contemporaries Lloyd Moseby and Von Hayes, although neither won any Gold Gloves and Van Slyke has a higher OPS+ than either of them.

He wanted to be a weather reporter on TV. One of the local Pittsburgh stations let him do a guest spot and he wandered off camera at one point and was pointing at incorrect areas at another point. Overall, it made one realize that some skill is required in reporting on the weather.

Known for being loquacious and a good quote, Van Slyke was popular with the media.

"On the road when you do downstairs for coffee in your underwear, they throw you out of the kitchen." - Andy Van Slyke, on how life is different when you play on the road

"The biggest adjustment from the minors was learning to spend $45 in meal money." - Andy Van Slyke

In late 2004, he drew more media attention for claiming that former teammate Barry Bonds was a steroid user, basing his statement on Bonds' muscle gain.

Van Slyke was the center of controversy when the Pittsburgh Pirates signed him instead of devoting those resources to the younger, more talented but less popular Bonds. Some claimed racism was at work as well. Van Slyke faded quickly, Bonds kept winning MVPs and the Pirates went without a winning season for two decades.