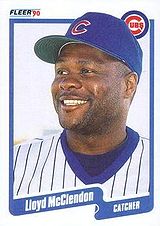 Lloyd McClendon was first noticed during the 1971 Little League World Series when he hit five home runs in five at bats. In the championship game, he was intentionally walked four times after hitting a 3-run homer on his first at bat of the game. He also pitched and had the game 3-3 entering the 9th when he faded and wound up losing to Chin-Mu Hsu of Taiwan. He set Little League World Series records for home runs, average, OBP and slugging.

He hit 24 home runs for the Denver Bears to lead the 1986 American Association. Though he was mainly used at 1B, he was named the DH on the league's postseason All-Star team. He also finished third in the league with 88 RBI.

McClendon was a utility man for the Cincinnati Reds, Chicago Cubs, and Pittsburgh Pirates, known for his solid performance off the bench. His reputation for clutch performances was helped by the 3 National League Championship Series he played in. Overall in 23 plate appearances McClendon tallied 10 hits in 16 at-bats along with 6 walks, putting up a .625/.696/.938 statline.

After his playing career ended, he was a hitting coach with the Pittsburgh Pirates from 1997 to 2000. He became manager of the Bucs in 2001 and was fired by the club on September 6, 2005 after never having a winning season. He was well-liked by most players and frequently argued with umpires. A common criticism was that McClendon quickly made decisions about a player and refused to rethink that player's role based on the player's performance.

In 2006, he was named a bullpen coach with the Detroit Tigers. After a year, he was moved to hitting coach. He stayed with Detroit until the end of the 2013. While he was considered to succeed the retired Jim Leyland as the Tigers' manager at that point, the job went to Brad Ausmus. However, a few days later, on November 5, he was named to succeed Eric Wedge as manager of the Seattle Mariners in 2014. After a particularly disappointing season in 2015, he was dismissed on October 9th.

He was named manager of the Toledo Mud Hens of the International League for 2016, his first managerial assignment in the minor leagues. In 2017, he returned to the majors as hitting coach of the Tigers, then in 2020 was named the team's bench coach. He became the interim manager with a week left to play in the abbreviated season when Ron Gardenhire abruptly announced his retirement. He was then fired when the season ended, along with most of the coaching staff.

In December 2005, McClendon received an honorary doctorate from his alma mater, Valparaiso University. His son Bo McClendon was drafted out of Valparaiso in 2010.