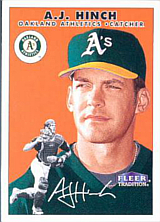 A.J. Hinch was drafted in the second round of the 1992 amateur draft out of high school. He batted .440 for Team USA in the 1991 World Junior Championship and drove in 10 runs to tie for the team lead; he led them in average as they won Bronze. Hinch hit .450 with 10 steals, 11 runs and 9 RBI for the US in the 1992 World Junior Championship, leading the team in steals and finishing second in average behind John Roskos as they won Silver. In the 1993 Intercontinental Cup, he hit .250/.400/.250 for Team USA while splitting catching duties with Darren Grass. Opponents stole 4 bases in 7 tries. Hinch was 2 for 3 with a walk in the semifinal upset win over Japan and went 0 for 2 against Omar Ajete coming off the bench in the Gold Medal game loss to Cuba. He batted .214/.290/.321 as the catcher for the US in the 1994 Baseball World Cup. He elected to attend Stanford University, where he was a third round pick after his junior year in 1995. He decided to return to school and was again a third round pick as a senior in 1996. In the same year, he won a bronze medal for the United States at the 1996 Atlanta Olympics.

Even while playing, Hinch was planning a post-playing career. He even went so far as to go to the General Managers' winter meetings to look for future job opportunities and contacts in 2003. In July 2006 Baseball America named him one of baseball's "10 to watch" in the next 10 years for his promise as a Farm Director and future General Manager. He served as the Arizona Diamondbacks' Director of Player Development until May 8, 2009, when he was named manager of the team. It was an unexpected move as Hinch had neither coached nor managed in organized baseball. However, his predecessor Bob Melvin had been criticized for the lack of development by the many young players on the team, and Hinch's experience in that side of the game was seen as something the team badly needed at the time. The experiment lasted barely a year, as Hinch was fired, along with General Manager Josh Byrnes, on July 1, 2010. The team was in last place at the time, a position it had occupied for most of Hinch's tenure at the helm. Like Byrnes, Hinch joined the San Diego Padres in 2011 as Vice President of Professional Scouting.

On September 29, 2014, Hinch was hired by the Houston Astros as their new manager starting in 2015. He was succeeding Bo Porter, who had been fired on September 1st because of philosophical differences with GM Jeff Luhnow; Tom Lawless had guided the team in the interim. In his first season at the helm, he led the Astros to the postseason, as they defeated the New York Yankees in the Wild Card Game before bowing to the Kansas City Royals in the Division Series. It was considered a very successful year, as the Astros were at least one year ahead of schedule in becoming contenders. 2016 saw a bit of a fall-back, as Houston had 2 fewer wins than the previous year and as a result missed the postseason. But in 2017, everything clicked as the Astros won the AL West title handily with a 101-win season, then won the first World Series title in their history by defeating the Los Angeles Dodgers in seven games in a very tightly fought Fall Classic. Hinch was lauded for his creative bullpen usage during the postseason, especially his use of starting pitchers in long relief and to close games after disappointing performances by some of his front-line bullpen members, especially Ken Giles and Chris Devenski. In 2018 the Astros continued to play well, although they were in a tighter race for the division title than expected, because of surprising very good seasons by the Seattle Mariners and the Oakland A's. On August 30th, Astros management announced that Hinch's contract had been extended for another four years after the end of the current season. The Astros did win the division, then swept the Cleveland Indians in the Division Series before falling to the Boston Red Sox in five games in the ALCS.

The usually mild-mannered Hinch is not one to get into vocal arguments on the field. However, he did earn a one-game suspension for an incident in spring training in 2019. He got into an argument with umpire Angel Hernandez one pitch into a Cactus League game on March 15th and was ejected; afterwards he called the umpire "unprofessional" and "arrogant" in discussing the incident with members of the media. It was these words that displeased Major League Baseball and earned him the penalty. Despite this hiccup, the year 2019 was kind to Hinch and his 'stros, with the team going 107-55 and reaching their second World Series in three years. They lost to the Washington Nationals in seven games, and shortly thereafter, the roof caved in as it was announced that Major League Baseball had launched an investigation into allegations that the Astros had used technology to steal their opponents' signs during the 2017 season. When MLB handed its verdict on January 13, 2020, Hinch was handed a one-year suspension, as was General Manager Jeff Luhnow, and the team was fined $5 million and forced to forfeit its first and second-round picks in the next two amateur drafts. Almost immediately, team owner Jim Crane fired both Luhnow and Hinch.

On October 30, 2020 he was hired by the Detroit Tigers to be their manager in 2021, replacing Ron Gardenhire and interim manager Lloyd McClendon with the rebuilding team. His suspension had officially ended with the completion of the 2020 World Series, and it had taken only three days for he and the Tigers to come to an agreement.