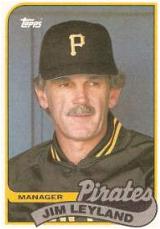 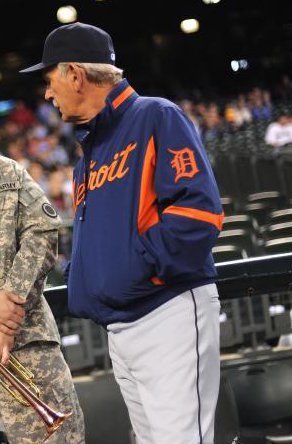 Jim Leyland has been a minor league catcher, a major league coach, and a major league manager whose teams won several division titles as well as the 1997 World Series and the 2006 American League pennant.

Leyland was signed by the Detroit Tigers in September, 1963. He played in the minors from 1964 to 1969 in the Tigers chain, primarily as a catcher. Another future major league manager, Gene Lamont, was also a catcher in the Tigers organization and was on Leyland's team in 1966.

He was a Chicago White Sox coach from 1982 to 1985 before taking over as the Pittsburgh Pirates manager in 1986. He led the team for eleven seasons and won three division titles.

He spent 1997 and 1998 as manager of the Florida Marlins, where he won the 1997 World Series. The Marlins sold off or traded all of their best players after their World Series triumph, and as a result became the first team to lose over 100 games the year after winning the Series. At the end of the season, Leyland quit in disgust over the front office's approach.

After managing the Colorado Rockies in 1999, Leyland felt that he did not have the fire necessary to manage at the major league level anymore and then spent the next six seasons as a St. Louis Cardinals scout.

Leyland was hired to be the 36th manager of the Detroit Tigers on October 4, 2005. He led the team to a surprise wild card berth and World Series appearance in 2006. In 2009, the Tigers were in first place for most of the season but were caught by the Minnesota Twins on the last day of the season. They then lost a dramatic one-game playoff with the Twins in extra innings and missed out on the postseason. Leyland led the Tigers to the first AL Central title in team history in 2011, and then to an upset win over the New York Yankees in the ALDS before falling in 6 games to the Texas Rangers in the ALCS. They repeated as AL Central champions in 2012 after a slow start, disposed of the Oakland A's in the ALDS and then swept the Yankees in the ALCS. However, the tables were turned in the World Series, as the San Francisco Giants in turn swept the Tigers, shutting them out in consecutive games in the process. In 2013 the Tigers won their third straight AL Central title and advanced to their third straight ALCS. This time the team fell to the Boston Red Sox in six games. After the loss in the playoffs Leyland announced he was stepping down as Tigers manager and would take another position with the team. He finished his Tigers tenure with a record of 700-597 with 4 playoff appearances and 2 American League pennants. His major league managing career ends with a 1769-1728 record in 22 years with 8 playoff appearances, 3 pennants and a World Series title.

He came out of retirement in 2017 to manage Team USA in the 2017 World Baseball Classic. He said it would be his last time putting on a uniform, and he went out in a blaze of glory as he lead the United States to its first-ever triumph in the event, defeating Puerto Rico, 8-0, in the finals.

His son Patrick Leyland, a catcher, was drafted by the Tigers in 2010. Jim coached his son in spring training in 2011, as he was one of three young catchers from the organization invited to work out with the major league team.