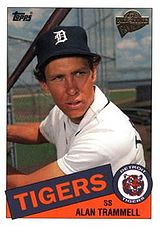 Shortstop Alan Trammell played his entire big league career with the Detroit Tigers and hit over .300 seven times. Only Ty Cobb and Al Kaline played longer for Detroit. He was elected to the Hall of Fame by the Veterans Committee in December 2017, alongside long-time teammate Jack Morris, and was inducted in July 2018.

Trammell was selected by the Tigers in the second round of the 1976 amateur draft. He began his pro career that summer with the Bristol Tigers and hit .271/~.386/.314 before being promoted to the Montgomery Rebels later that season, bypassing A ball entirely. He put up a .179/~.304/.179 line in 21 games there and returned to the Rebels in 1977 with much better results. He hit .291/~.362/.414 for Montgomery that year with an amazing 19 triples (he only had 9 doubles and 3 homers, so 61.3% of his extra-base hits were for three bases) as he was named the Southern League MVP. He was fifth in the SL part of the Dixie League in average and led the loop in triples. At age 19, he got a September call-up to Detroit, skipping AAA. On September 9th, he made his big league debut, starting a game against the Boston Red Sox alongside longtime teammate Lou Whitaker, a second baseman who was also playing in his first big league contest.

Along with Whitaker, Trammell was the Opening Day starter for Detroit in 1978, beginning a long run as a regular in the Tigers lineup. He hit .268 as a rookie and finished fourth in 1978 American League Rookie of the Year Award voting (ironically, behind teammate Whitaker) as the Tigers began a string of 11 consecutive winning seasons. Two seasons later, in 1980, he hit .300, won his first Gold Glove, and made the All-Star team for the first time in his career.

Trammell was known as a very good contact hitter who usually managed to put the ball in play. He hit .300 seven times, was a six-time All-Star, and won four Gold Gloves. Based on similarity scores, the most similar player to Trammell is Hall of Famer Barry Larkin. Two other Cooperstown honorees, Ryne Sandberg and Pee Wee Reese, are also on the list of the ten most similar players. Appropriately, Whitaker, who played alongside Trammell for 19 years, is 4th on the list.

The Hall of Fame Monitor appraisal method showed Trammell as having more than enough points to be considered a "likely" Hall of Famer, but his performance in ballotting by the BBWAA was disappointing (although nowhere near as poor as Whitaker's). His highest vote total in his first ten years had been the 22.4% he received in 2010, but in 2012, he made a significant jump thanks to a weak first-year class, reaching 36.8%, although time was by them running out for him to gain election. Indeed, he fell back to 33.6% in 2013 and 20.8% in 2014 and seemed destined to have to wait for the Veterans Committee to consider his case, like his former double play partner Lou Whitaker, who received even shorter script form the BBWAA. Indeed, he was at 25.1% in 2015 and in his final year, in 2016, he made a significant jump, to 40.9%, but it was too little too late for him. In 2018, he was selected by the Veterans Committee for consideration for the first time and was elected immediately, receiving 13 of 16 votes. Following the election, Tigers owner Christopher Ilitch announced that his number 3, along with Morris' 47, would be retired by the Tigers during the season.

After his playing days ended, Trammell was the Tigers hitting coach in 1999 and the Padres first base coach from 2000 to 2002. He was the manager of the Detroit Tigers for three seasons, beginning in 2003. In his first year with the club, the team went 43-119 and challenged the modern record for losses in a season. Despite improvement the next two seasons, he was fired the day after the 2005 season ended. In 2007, he was named the Chicago Cubs bench coach. When he was passed over for the Cubs' managerial job after Lou Piniella retired in 2010, he left the organization and joined his long-time Detroit teammate Kirk Gibson, now manager of the Arizona Diamondbacks, as his bench coach for 2011. He stayed in the position until Gibson was fired on September 26, 2014; he was dismissed too that day, but team President Tony LaRussa asked him to stay on as interim manager for the final three games of the season.

In November of 2014, Trammell returned to the Tigers' organization as a special assistant to General Manager Dave Dombrowski.

Away from the diamond, Trammell appeared along with Whitaker in an episode of the TV show "Magnum PI" in 1984. [1]